After the monster success (pun intended) of Dawn of the Dead (1978), George A. Romero could pretty much direct anything he wanted. He had made in Dawn, a sequel with social commentary which not only satisfied an intellectual bent, but redefined zombie horror, eclipsing his own groundbreaking first film all while being an international smash. So what movie did Romero choose as his next entry? 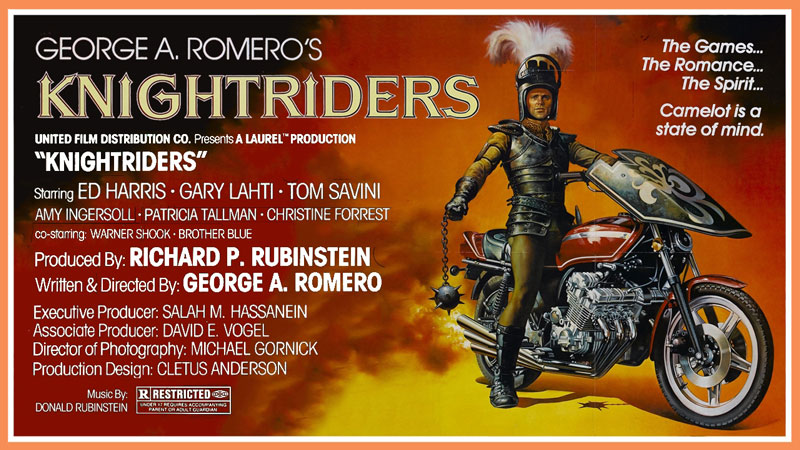 Knightriders is a perfect title. In one word it encapsulates the entire plot of the movie about a traveling group of medieval reenactors living their lives by an Arthurian code who joust on motorcycles instead of horses to the delight of drunken crowds in Western Pennsylvania. Their group is under fire by bloodsucking entertainment promoters, crooked cops, and a King played by Ed Harris in his first starring movie role, who might just be losing his mind. It’s about honor, glory, and a motorcycle movie all wrapped in one.

Unfortunately right around the same time Romero was making his Dawn of the Dead, a TV show wanted use the same title and actually paid Romero for the privilege of sharing it. It was a smart move, they were in different mediums, and after all who’s ever going to watch a TV show about a talking car anyway? 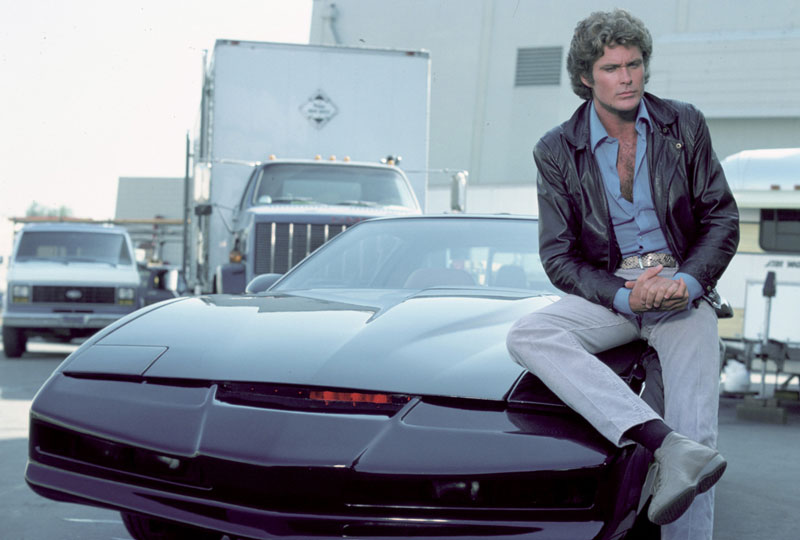 Second strike against it, was it was made by a master of monster movies and it had no monsters. Although Romero does a masterful job of setting up the films modern day mythology the magic isn’t real. It lives inside all in the characters hearts and minds. The dragon King William chases is purely metaphoric, and his crown is simply a prop. So anyone rushing to the theatre to see the grand majesty of Camelot ended up seeing a strange motorcycle club playing dress up. But that is the beauty of Knightriders and why it’s so truly amazing. This isn’t a story of misfits playing pretend, it’s a story about living by a code in a world no one understands or respects. Or better put (like the movie’s marketing campaign): Camelot is a state of mind.

The film lives and dies by Harris’ King William or Billy as he’s affectionately known. 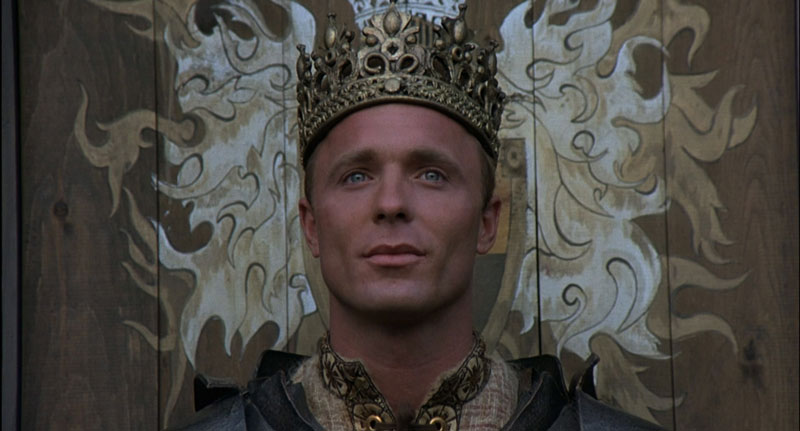 Billy’s belief in their chosen life is the strongest which is why he’s the obvious choice for King. He sleeps outside, bathes in the local steam, and is haunted by visions driving his passion for the renaissance faire lifestyle. His code is so strong he refuses to sign an autograph for a young fan at a match, or payoff a local cop, both things those around him find nuts. When confronted by his Queen for refusing to sign the boy’s autograph, he rails “I am not trying to be a hero! I’m fighting the dragon!” Harris’ line reading is just south of melodrama but somehow makes it work. The entire film could be seen the same way. Every chance the movie could easily become camp or over-the-top, it doesn’t. Romero grounds us firmly in this crazy world and we go along for the ride.

Romero liked to work with his friends. He created in his nearly all of his productions a work family that loved, and were loyal to him. And what a work family it was. Romero assembled a cast and crew for Knightriders of both past and future regulars including Ken Foree, Scott H. Reiniger, John Amplas, Warner Shook, Christine Forrest, and Tom Savini.

Even Ed Harris, despite his rising star, would return to Romero for a segment in Creepshow a year later. To this day Harris still speaks fondly of his time working with Romero and of his first starring movie role.

In a wild but true piece of movie trivia, future Academy Award Winning Best Actress Holly Hunter, and recent graduate from Romero’s Alma Mater Carnegie-Mellon University, worked as a production assistant on the film. Christine Forrest, who does a masterful job playing the grease monkey mechanic Angie, would go on to marry Romero after the movie wrapped. In another wild but true piece of trivia, Stephen King, who along with his real life wife Tabitha, appear in cameo’s as “Hoagie Man” and his lady, named his horror novel Christine after her. 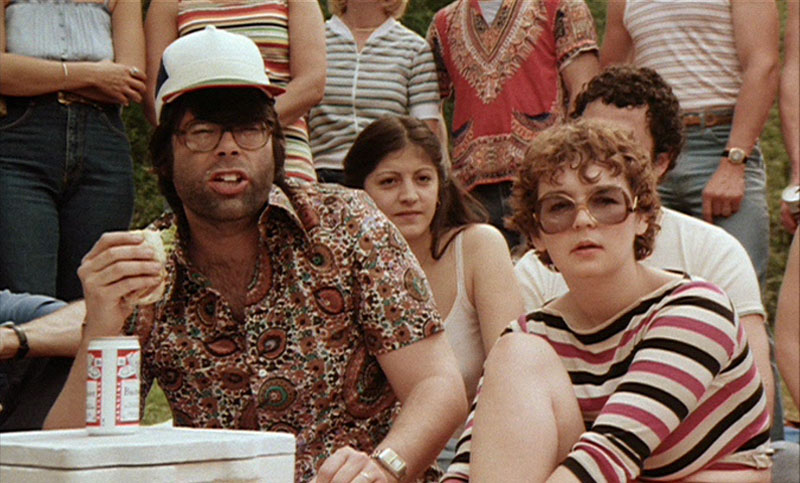 In one of the longest relationships in movie history Tom Savini and Romero are a pair that exemplify the best. Savini, who’s most widely known for his amazing and groundbreaking special makeup effects work, appears here in front of the camera as Morgan, the black knight boyfriend to Angie and all around thorn in the side of Billy.

Despite Savini’s successes in the realm of gore makeup and horror film directing, it’s notable to say his acting in Knightriders is really very good. His character is far and away the most flashy in the group but Savini never uses it as an opportunity to chew the scenery like you’d expect. 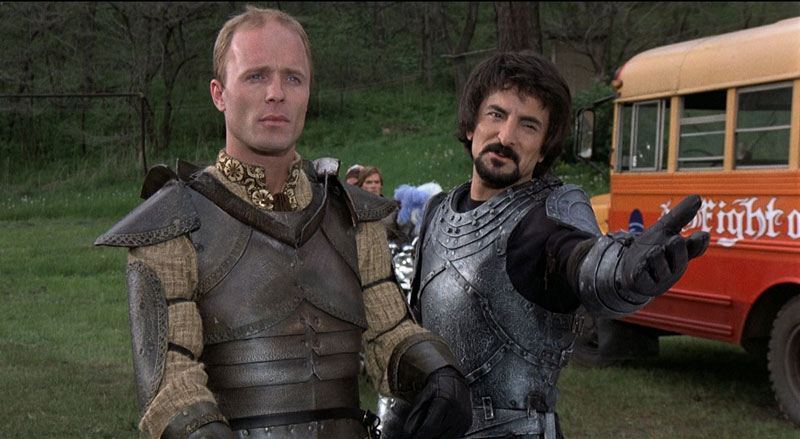 He plays a foil to Billy without being a villain and his arc back from the trappings of fame to his roots is heartfelt and believable. Savini also has a great look. He rocked the thick black goatee way before it ever became hip to do so. Most people’s first introduction to Savini as an actor is as “Sex Machine,” the biker fighting alongside Clooney and Tarantino, in the Robert Rodriguez Vampire thriller From Dusk to Dawn. But his work here as Morgan is so good it makes one think why he couldn’t have followed along the same path as Harris.

Whether or not Romero was aware in 1968 when he made the original Night of the Living Dead of the groundbreaking social commentary in casting a black male lead, is oft debated conversation.

However, by 1981 he was not only aware, he embraced it. Knightriders, to this day, remains one of the best examples of diversity, feminism, and LBGT acceptance ever put on film. What Hollywood still sometimes awkwardly attempts by casting the “black best friend” or the “gay friend with the funny one-liners,” Knightriders took head on with ease and without apology. 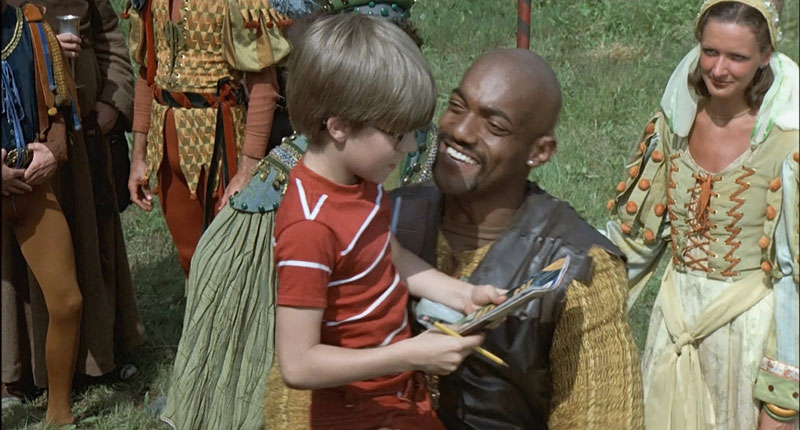 One of the side-stories in the movie is that of Pippin played by Shook. Pippin, the troupe’s show announcer, lives the life of an “out” man but can’t quite seem to verbalize it, even to his best friend Angie. She gives him crap about it telling him as her best friend she doesn’t even know. The larger point of the scene was Angie’s friendship was a safe place for Pippin, this whole group, bikers included, was. It’s fair to point out in 1981 this was not something people discussed openly.

In terms of feminism the women of Knightriders are all strong voices of respect and authority. The aforementioned Angie, is a spunky no-nonsense mechanic who not only excels in what is traditionally a man’s job, but is the perfect compliment to her wandering boyfriend Morgan. Amy Ingersoll playing Linet, the Queen to Harris’ Billy, takes over and defies Billy’s express orders to stay put when he’s arrested. 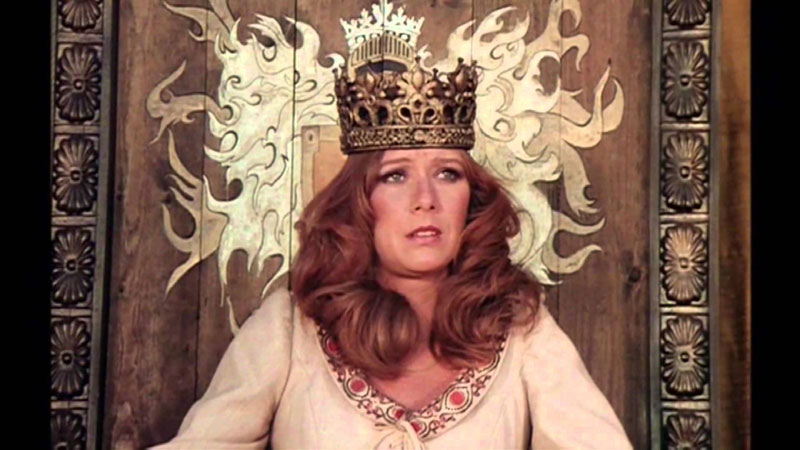 She shows strength and independence putting the groups needs above her boyfriend the King. And then there’s Cynthia Adler’s kickass Rocky. Rocky is one of the best bikers in the troupe and is so unflappable a skinhead literally throws himself off a bike in fear of her. Today’s audiences may marvel at the casting of Gwendoline Christie playing Captain Phasma the female stormtrooper, but Romero did this with Adler’s Rocky back in 1981.

In terms of diversity Romero had been doing this in his casting for years. People of color all have equal prominence in Knightriders. Racism doesn’t exist inside the troupe. Brother Blue, in what would be his only real film appearance, plays Merlin. Brother Blue, an African American Yale trained actor and Harvard Divinity student, spent his entire life as a living storyteller. He would take his stories everywhere from street corners, to prisons, to school libraries throughout the globe. 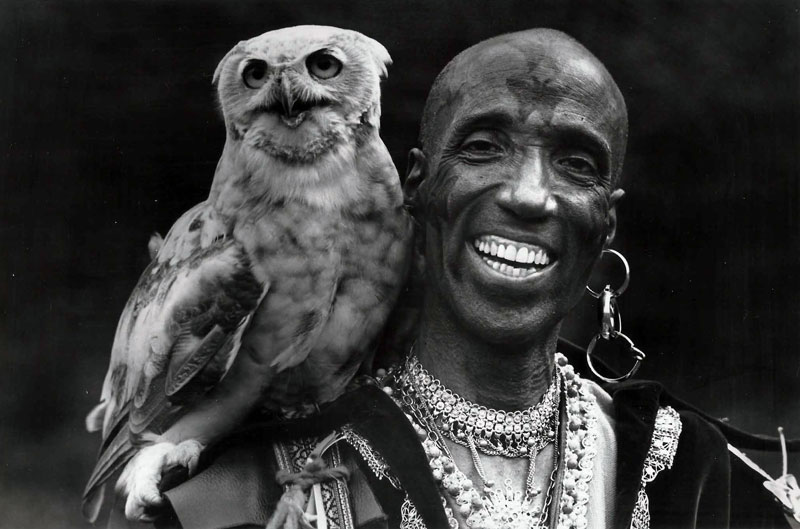 On a personal note I saw him perform once when I was in middle school and he was amazing. The fact this man never acted in more projects is a crime. This is all the more reason to embrace this wonderful movie.

The Camelot homage runs throughout the film. The Lancelot/Guinevere love triangle is hinted at, the fighting for the honor of the King is a constant, and there’s even a lady-in-waiting side story of a teen runaway played by another terrific Romero stalwart, Patricia Tallman, later of Babylon 5 fame.

The film has so many great scenes but there’s one I find to be hauntingly beautiful. During some downtime in the camp King William finds another member of his troupe playing guitar while singing softly to himself. Upon approaching him he stops. When Billy presses him to continue he gets shy and professes the song isn’t finished. The scene is so realistic it looks like something that happened between takes while Harris was roaming around. He tells Billy over and over politely he can’t continue. It’s not until the end of the film do we hear the entire song and it’s beautiful. This is the essence of the entire code of Billy’s life. He couldn’t hear the rest, because his journey was still unwritten. 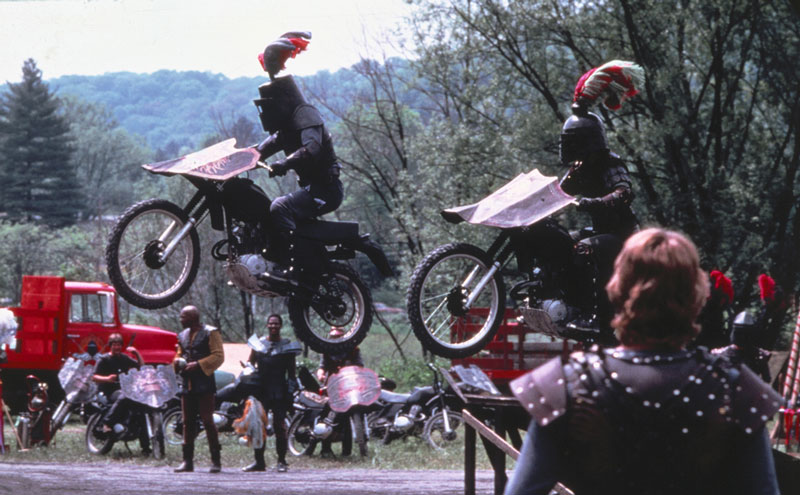 To dismiss this as simply an action film, or motorcycle movie would be a mistake. Having said that it has a lot of action and boasts some incredible motorcycle stunts. One stunt in particular is so gnarly you’re certain you just watched a man die only to see him pop up and smile. It’s safe to say Romero dodged some OSHA bullets on that one.

I think it’s okay not to have heard of Knightriders. It had a lot going up against it. It’s easy to confuse with the Hasselhoff TV series and also to dismiss it as another horror film based purely on Romero’s name. Another Arthurian film, Excalibur, by John Boorman was released on the same day, and if that weren’t enough of a challenge, the entire country was still reeling from the recent assassination attempt on the life of President Ronald Reagan. 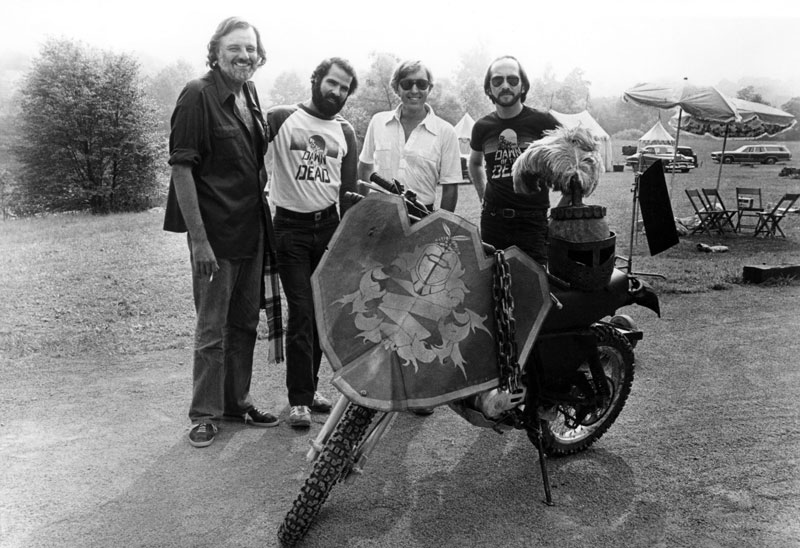 If Knightriders were made today it would most likely be an amazing 10 or 13 episode series on a pay network like Netflix or HBO instead of a feature film, but I must add, it does NOT need to be remade. It’s fine all on its own. Finding gems like Knightriders is one of the best things about being a lover of cinema. It also boasts one of the best movie posters of all time painted by the renowned Italian fantasy artist Boris Vallejo.

Knightriders is available on DVD and Blu Ray with plenty of extra features and commentaries by Romero, Savini, and many of the other cast members. It’s a great legacy to the late George A. Romero and a must for any film library.