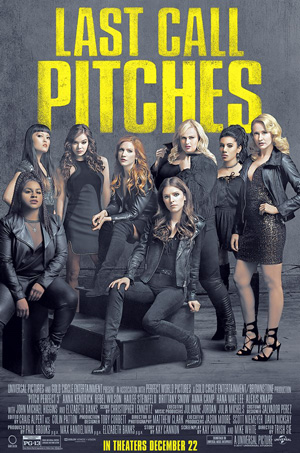 It’s the same old song and dance for the third outing of the Pitch Perfect franchise.

The formula, “weird and quirky women find sisterhood through cover songs and mediocre competition”, is as predictable as your 10 year old niece trudging through Greensleeves as a first recital piece

The camaraderie and chemistry between the main Bellas leads to a few bright moments, but at a surprisingly (thankfully?) brief 93 minutes, this film was not the swan song the ladies deserved for a franchise that has raked in over $400 million dollars.

After winning the World Championship, the Bellas go off on their separate ways into the adult world. But they find themselves uniting one more time at an overseas USO tour where the best act will open for hip hop producer DJ Khaled.

As the girls face the reality of post-competition life, they must find their own individual ways forward. Thankfully, they’ll always have their sisters as backup when they really need it.

As usual, the movie centers on the deadpan Beca, played by Anna Kendrick who is slightly more sentimental and group-oriented in this movie than previous outings.

The entire Bella cast reprise their roles, but there simply isn’t enough time to update about what they’ve been doing since the competition. It’s strange that the lack of backstory is noticeable, understandable, and thankfully absent all at the same time. The ship has sailed on creating emotional investment in the team as individuals and lines go to the same favorites as the last tw movies, like Hana Mae Lee’s always quiet and creepy Lilly.

The heavy lifting as far as comedy is reserved again for Rebel Wilson’s turn as Fat Amy. Her irreverence and physicality are very much needed to break through the monotony of songs that are so similar in choreography and execution that they become well-worn less than halfway through. Strangely, no men save for John Michael Higgins have returned. His reporting alongside Elizabeth Banks, shoehorned into the plot, remains snarky and worth more than a few snickers.

Perhaps most surprising are the additional actors new to this movie. Ruby Rose leads the competing band ever moist (yes, that is truly their name) and John Lithgow is woefully underutilized as Rebel Wilson’s estranged father. DJ Khaled basically plays the role that you would have given to Puff Daddy if this were the late 90s/early 2000s, meaning he is already larger than life so he can easily represent himself. His name is mentioned so often, you wonder if he actually partially sponsored the movie and it was a way to cover product placement.

As the competition moves forward, it is brought up yet again that the one with the most raw talent is Beca, yet at this point she has formed such strong allegiances with the rest of the Bellas that she is unwilling to fully pursue her own dreams if it means leaving them behind.

And unfortunately, there’s nothing really at stake in the movie to make anyone care about their futures one way or the other. Even the competition is treated as a bit of a parody of itself. Being that the bands that they are competing against are actual bands with instruments and original compositions trying for the chance of a lifetime to open for DJ Khaled requires a complete suspension of belief for a college acapella group to stand any sort of reasonable chance. This inability to create a sense of urgency or engagement is intensified by a shoddy subplot whose only silver lining is that it least gives us the chance to see some great ass-kicking physical comedy and fight scenes from Wilson.

Even with the talents of Kendrick, Wilson, Higgins, and Banks, Pitch Perfect 3 is more of a dive bar karaoke version of the brand than a stylized concert cover. And that is unfortunate, because after this movie there will surely be no one requesting an encore.