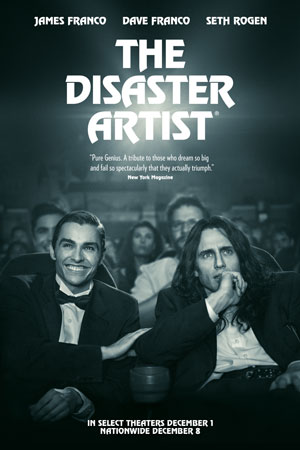 The Room is inarguably the worst film in the last 50 years.

Millions love it. We all acknowledge it to be one of the worst films ever made. Yet it lives in infamy and revels in its shlockiness and awfulness as midnight showings and appearances by its creator Tommy Wiseu are constantly sold out across the country.

It is an ironic and somewhat rewarding realization that it has spawned on of the best films of 2017.

The Disaster Artist is a loving and somewhat scathing retelling of the creation of the cult favorite film, The Room by the mysterious and definitely bizarre, Wiseu.

Playing, Wiseu, and directing, James Franco disappears into the roll of the the eclectic auteur. Like Wiseu with The Room, he acts and directs with a passion and love of the craft. Thankfully, unlike the man he is portraying, Franco is actually a brilliant director and actor.

The Disaster Artist is entirely better then it has any right to be.

Based on the book written by actor Greg Sestero, who played, Mark, in the original film. The biographical account of the making of The Room, is almost as insane as the film itself. Instead of it being a sarcastic parody and making fun of the person and his film, The book and the film The Disaster Artist is a loving embrace and nod to the passion of film making, regardless of the quality of the end product and the actual talent of its creator.

Much like Ed Wood, Tim Burton’s loving tribute to another terrible yet passionate film maker. What Franco has accomplished with The Disaster Artist” is to show not just how a bad movie was able to be made but why and at what cost it was done. He humanizes Wiseu, while showing his eccentric and sometimes megalomaniacal mannerisms. The viewer is not quite sure whether it is all an act or if he is completely serious. Whether he is just acting like how he thinks big time directors like James Cameron or Michael Bay have been known to act on sets or if the outbursts and incredibly outrageous working conditions are an unconscious choice due to being mentally unstable.

Never does Franco or the writers pass judgement on him or the film. He instead lets the actions of the man and the film he is making, speaking for themselves.

This film requires you to have to sit through The Room to truly appreciate the extent of how exacting they match it scene for scene. It also requires you to sit through some truly uncomfortable sequences. Sequences made even more nigh unbearable when you know that they were actual situations real people were put through in real life.

What i found most surprising and truly appreciated was that Franco and company made an emotional roller coaster of a picture that is unbelievably uplifting and actually, in the end, a true feel good film about a really bad one.

I can’t recommend this film more right now and as it stands it is definitely on my top 5 films of the year so far. I can see why it received the much deserved standing ovation when it was screened a SXSW in March and why Tommy Wiseu personally chose James Franco to make this film.

Go see it. You will laugh, you will cheer, you will yell, you will applaud. Never has there been such an amazing movie bout a completely garbage film as the Disaster Artist is to The Room.

It actually makes The Room even better then it already is.