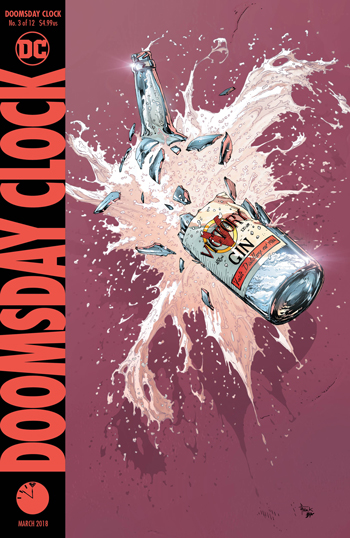 The latest issue of Doomsday Clock is relatively packed, and moves faster than previous chapters as a result.

While that makes for a brisk read, it doesn’t necessarily make for a better storytelling experience.

Indeed, it seems that this is a story that won’t truly be satisfying until read all at once.

Last issue ended on two big cliffhangers: a very much alive Comedian ambushing Adrian Veidt in Lex Luthor’s office, and the new Rorschach face to face in the Batcave with the Dark Knight.

Geoff Johns jumps into addressing those threads, and gives Gary Frank an opportunity to reinterpret key moments from Watchmen in the process. Frank is in top form here, and his facial expressions are a highlight, especially in a scene where the Mime and Marionette get into big trouble in a Gotham bar.

Also of note this issue is an extended sequence in a nursing home, where we see Johnny Thunder waiting for his family.

On one hand, it’s interesting to see him and lends credence to the idea that this story will see the return of the Justice Society. On the other hand, the narrative device Johns and Frank employ here, juxtaposing current events with an old film noir, smacks too much of the original Watchmen‘s “Black Freighter” subplot.

Rorschach gets a particular focus here, as we finally see his face and flash back to the end of Watchmen, from his point of view. He also seems to receive the greatest sympathy, especially the way this issue ends. Rorschach is all too willing to follow Batman, but the Caped Crusader doesn’t seem too keen on doing the same, leading to a particularly cruel betrayal.

That the moment lands as well as it does is a testament to Johns and Frank’s character work–three issues in and this new Rorschach feels distinct enough from his predecessor, yet familiar enough to believe in the role.

While this issue does seem especially fleet, it still doesn’t go very far. Three issues in and Johns is still parceling things out very carefully. Here’s hoping they dispense with the table-setting as the first quarter of the story closes.

Otherwise, I’m not sure how much I want to stay on the ride.