Here are some titles to make the cold days of winter better! 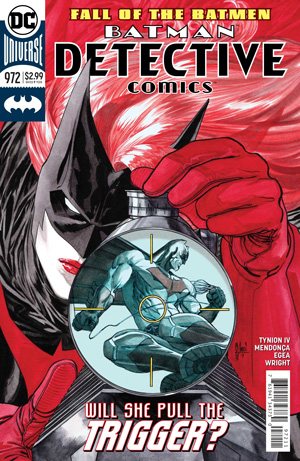 This is the fourth part of the “Fall of the Batman” storyline.

It’s less than exciting. I feel Tynion has been impressing me less and less as this series progresses. His characterization of Batman is dreadfully dull and doesn’t excite me much.

In this issue, Batman has just beaten the Victim Syndicate.

The Syndicate however, has one last big ploy to take Batman down. They have made one of his enemies more powerful than anyone ever thought possible.

This should be more exciting than it is. I got bored. The art doesn’t help as it’s been really inconsistent these past few issues.

Pick it up if you’re a completist. 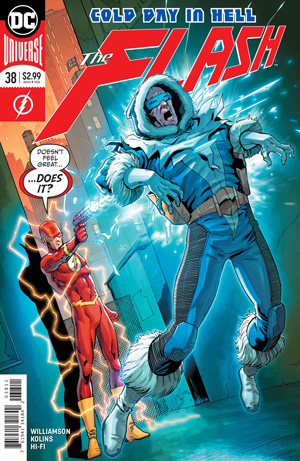 The Flash #38
Written by Joshua Williamson
Illustrated by Scott Kolins

This is a heck of a finale for an interesting arc. Joshua Williamson has written a great storyline that has kept the reader on their toes, ending on a high note.

“A Cold Day In Hell” ends here! The Flash goes around with one of his enemies and tries to figure out who killed one of his rogues in Iron Heights prison.

The twist comes when there is an enemy blocking his way out.

That enemy? It’s none other than Captain Cold himself!

The story keeps moving and works well in tandem with the art. This has been a consistently great title.

The art here is nice as well by Kolins and really moves well with the story. 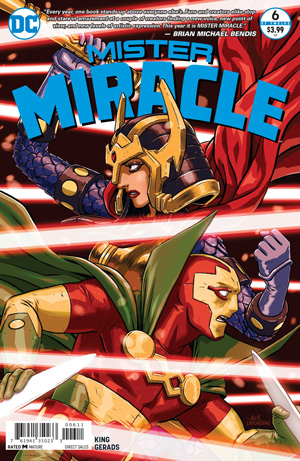 This is one of the best titles to debut from DC in the last year. Tom King just rocked writing this series.

This issue concluded the first “arc” of the title. It’s satisfying and it’s exciting. It also gets you pumped for what is coming in the final 6 issues.

Scott Free returns to New Genesis to face his punishment. The problem is though his whole world has been turned upside down!

Mister Miracle and Big Barda now battle all of these monsters and New Gods in trying to reach the Highfather. But there is a surprise there that they didn’t anticipate.

The writing is strong as can be. The art is pretty spectacular as well. I love this take on the character. It’s at the top of my reading list month in and month out.

Pick it up if you haven’t read it yet. It’s awesome. 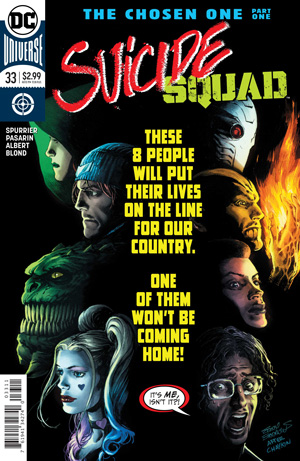 Holy wow! Suicide Squad finally gets a new writer! Simon Spurrier is such a breath of fresh air that I couldn’t help but jump for joy. He has a handle on these characters that has been sorely lacking since this launch. I hope he sticks around for longer than this.

This issue is the start of the storyline “The Chosen One.” In it, an apocalyptic new threat is on Earth. And guess who is called into action?

And they have a new member! His name is Juan! But what is this guy all about anyway?

The story plays fast and fun. Spurrier knows what he’s doing right out of the gate and it shows.

The art isn’t as good as I would have liked.

Still, this is a lot better than this book had been. It’s a lot more grounded. And that’s always a good thing. 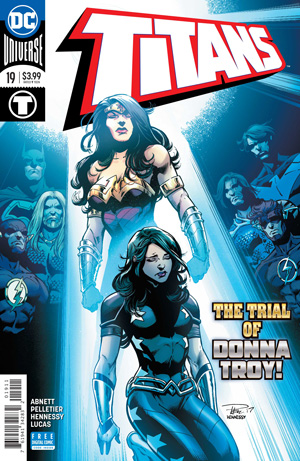 I have to come right out and say it: I have never been a big Paul Pelletier fan. I always have found him to be a watered down version of Alan Davis.

His doesn’t do much for me here either.

This issue focuses on the question of who is Troia?

The Titans are settling in after a big conflict! But the Justice League wants answers about Donna Troy’s real nature.

This leads to the two teams coming into conflict!

The story by Abnett is fairly strong. He writes all of the characters well and I was engaged throughout. So there are a lot of positives.

The art just brought it down for me. 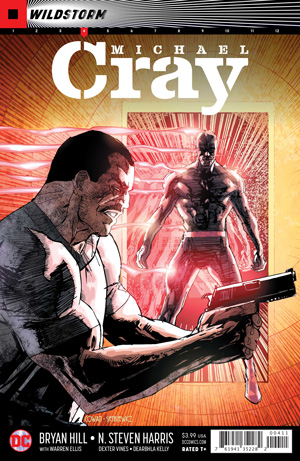 This has turned out to be a nice spinoff title. Warren Ellis has turned a line of books that were forgotten and made something new out of it.

He then handed this series over to Bryan Hill who has been doing really nice work here.

Michael Cray and his team try to befriend Barry Allen.

So they can turn him in! In this reality Barry is a killer and they must bring this guy down! But can they do it?

This is a fast and furious issue!

Hill keeps the story moving and moving quickly! The art is great for this title as well!

This was a book I wasn’t crazy about reading but has now turned into a nice little surprise. 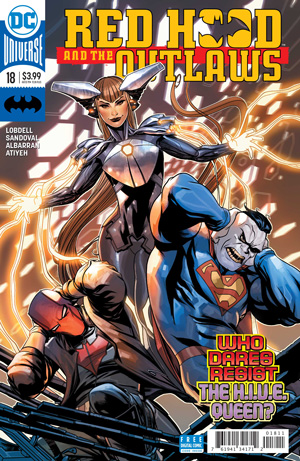 This is another fine issue that Scott Lobdell has written. He has taken these lesser known DC characters and made a really nice story for them with this comic. I look forward to it every month with a smile.

This is part five of the “Bizarro Reborn” storyline.

There is a mystery going on here! Artemis is trying to figure out how Bizarro got intelligence all of a sudden.

Meanwhile, the H.I.V.E. queen is tearing apart Gotham City. Everything is coming to a head and it’s quite exciting.

Lobdell keeps the pace and momentum moving in this comic. He also has a great flair for writing these characters. The art is decent here though I miss Dexter Soy.

Still, there is a lot to like. Pick this up. It’s DC’s best kept secret! 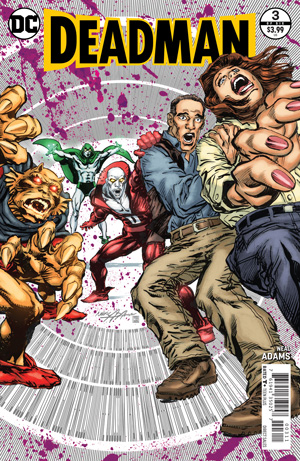 You have to admire Neal Adams.

He’s been in the comics field for so long, one can almost take him for granted. Adams has always put himself out there, hell or high water. It’s cool to see.

Sadly, I’m not that big a fan of his latest work.

This issue focuses a bit on Deadman’s father. There are some secrets to be figured out! It also becomes of interest to The Spectre, Etrigan the Demon, and the Phantom Stranger! There’s a bunch of plots here and they don’t add up to much.

Adams is still drawing away. At this point, he may just want to focus on that. His art isn’t what it used to be but it’s still powerful.

I love Deadman. But I wish this was a whole lot better. 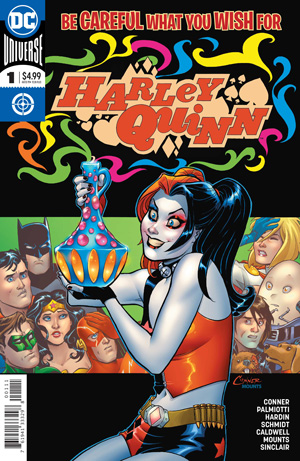 Harley Quinn: Be Careful What You Wish For #1
Written by Jimmy Palmiotti and Amanda Connor
Illustrated by Amanda Connor

Amanda Connor is awesome. She has been very closely associated with Harley Quinn these past few years. That’s a great thing because she has an expert handle on the character.

That’s certainly the case on this comic.

This comic book is a reprint of the Loot Crate comic that was an exclusive only.

The cool part is it has 18 more pages of original story and art by various other artists. What more can a reader ask for?

Harley gets herself into a bunch of hijinks. And it becomes crazy and it breaks the fourth wall! If you’re a fan you’ll love it. It’s breezy and it’s well drawn and it’s worth picking up. 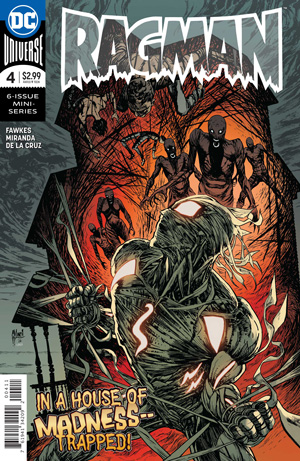 This is a title that has such a strange creative team on it but it somehow works. Fawkes has taken this character and somehow made him the most interesting he has been since the early Joe Kubert days.

Ragman sees that there is a bunch of evil headed towards our world. So what does he do?

He teams up with Etrigan the Demon to try to stop it.

But Etrigan has his own plans!

So, what’s Ragman to do? Who does he trust? And what will happen from this point on?

The story is quite good and weird. But I like this kind of weird!

Fawkes rocks as a writer and tells a good story. The art by Miranda is pretty damn decent as well. I can’t wait to see how it ends.