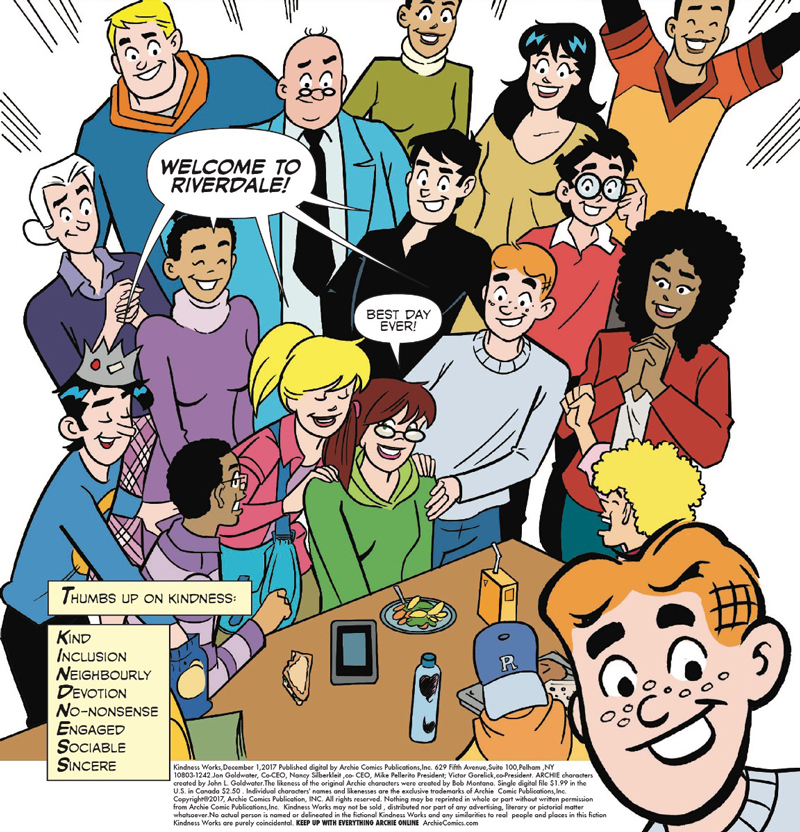 A few years back, controversial Archie Co-CEO Nancy Silberkleit, herself a former teacher, put out a comic book entitled Rise Above. Drawn by Stan Goldberg, it was the story of a young girl with braces being bullied at her school. I’m proud to say I worked behind the scenes on that one. In all my dealings with Nancy, I didn’t see any trace of the issues that have been put out there about her. No, what I witnessed first-hand was this woman’s genuine passion for comics as an educational tool.

Toward that end, Ms. Silberkleit now has another new project, and this time she’s brought some familiar faces along with her.

Kindness Works is something unique. It’s a 10-page short story featuring the classic versions of the Archie characters and yet you won’t find it at your local comic book shop. In fact, it’s only available—at least for now—as a PDF download direct from Nancy Silberkleit.

“I chose not to do mass distribution because the topic of inclusion is important not only to me but there is a seriousness to it today,” writes Nancy. “If the story went into a digest, I would not know if that digest got distributed to Pune, India, Dubai, Steamboat, Colorado, or would folks have read the stories…? Taking a hands-on approached allows me to do what I can for folks and hopefully they will do the same.”

The script for Kindness Works comes from Ray Felix, a well-known name in indie comics for a decade or so now. Outside of having Jughead seem to be Reggie’s sidekick rather than Archie’s, and helping the former make fun of the “weird kids” (He should talk!), what’s there is well-written. Story-wise, it’s rather slight and could do with being expanded. It seems to stop just as it gets going and we never really get to know our new character, Scarlett, any more than the Riverdale gang does.

The art is by Fernando Ruiz, in his first return to the Archie characters in several years now. Along with Dan Parent, Ruiz was unquestionably the best representation of the classic Bob Montana/Dan DeCarlo Archie style artist that the company had in recent decades. His insertion of Cosmo the Merry Martian (an obscure but now recently revived character published by Archie) in cameos in his stories became his Hitchcock-like trademark and yes, Cosmo—and Super Duck—pop up here, too!

Knowing full well how good Ruiz is, I suspect the inker is to blame for a few very amateurish looking panels and things like Scarlett’s rectangular glasses becoming ovals and then, in one panel, disappearing all together.

There is no plot, really. Just a situation. That situation is that the school where the more autistic students have been going has been closed and they’re now being bused to Riverdale High. We don’t meet any of these students and the only one named is Scarlett, who we quickly find out knew the gang when they were, as Archie puts it later, “tykes.”

Scarlett is shown to be uncomfortable with change and with loud noises. She is shown to have had, even as a child, an affinity for building things, although this is never followed up on or explained that this type of thing can be a part of autism.

Autism is a spectrum, and a wide one at that. I had to learn more than I ever expected to know about it when my son was diagnosed as being on the autism spectrum at age three. In his case, he got more of the good than the bad. He’s incredibly smart and currently enjoys a full scholarship ride in college. He does the handflapping—called stimming—so often associated with autism. At 21 he still has problems with fine motor skills. He is subject to seizures, is awkward in social situations, and is flummoxed if his regular routines change for any reason. He is also hilarious, politically astute, inventive, and just generally awesome.

I would have liked to find out more about where Scarlett was on the spectrum and her interactions with others would have shown that. Instead, other than the flashbacks, we see her being talked ABOUT the entire time and, as I said, the story stops just as it seems the gang is about to specifically interact with her.

There is a saying in the disability empowerment movement—“Nothing about us without us.” By making Scarlett solely the object of everyone’s curiosity and uncertainty, we never really get to meet Scarlett. And that makes me sad because she seems like a good character with lots of possibilities.

The story’s message is its title—“Kindness Works.” And that’s true, of course. It does work. But inclusiveness is also very important, as Nancy herself noted above. People on the Autism spectrum are no weirder than Jughead, Moose, or Dilton. They’re just different. Depending on where they are on that scale, they could be very, very different, or they could be so “normal” seeming that you might never know they were autistic. One could make that case, in fact, that Jughead, Moose, and Dilton ALL show signs of possible autism.

I applaud Nancy and crew for tackling a subject that needed to be tackled and I hope they intend to show us more of Scarlett going forward, somewhere, somehow, this time perhaps more from Scarlett’s point of view.

Kindness Works comes in a PDF from Nancy Silberkleit for $1.99, payable via PayPal to [email protected]

Not perfect, perhaps, but unique and important! Just like the neuro-diverse Scarlett herself.