Everyone’s running around in these books this week.

So much good cardio! (Still counts if it’s in flashback, Nightwing). 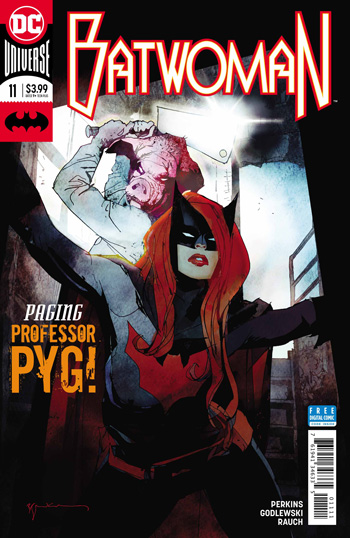 Kate may have wrapped up a case last issue, but life continued in the meantime and her good friend, Julia Pennyworth, got herself kidnapped.

The only evidence (on her yacht in Egypt) is the signs of struggle, an old newspaper article on missing tourists, and a shard of pottery.

With some lab work and some legwork it’s apparent the darling little dolls of Professor Pyg are grabbing the vacationers.

Like the clay he is named from (fun fact readers: piggy banks get there moniker from the orange clay “pygg” they used to be made of) Pyg likes to re sculpt his victims.

Kate has precious little time to find her friend (and the other kidnappees) in any recognizable state.

A tense chase, and a tight one-and-done. 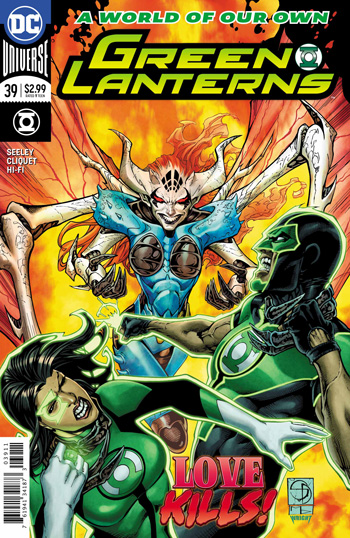 Who’s over the spoiled Regent’s daughter character? You’ll like this issue.

After throwing Jessica, Simon, and the Regent into pods with corpses, Liseth flew out to get good media coverage of her new look and a platform for her militaristically xenophobic messaging.

She says she wants her people not to suffer (while throwing energy blasts at the Molite refugees).

Jessica stops this with a large green “not” Kurt Cobain smacking her with his guitar (very satisfying).

It’s gonna take everyone working together to take down her OP butt, maybe even the people seeing what Liseth never intended – that the refugees are people just like them who deserve a chance to live. 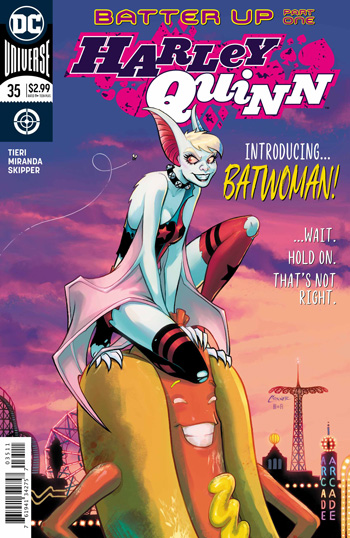 In this week’s issue – Batwoman (but didn’t I just say she was in Egypt?)

As the cover promises, the bats inside are less Bat-family and more Man-Bat.

While Harley stews in her sad (I feel you dear) only emerging for a spot of anger or violence, a bat monster’s been seen on the boardwalk and Tony’s disappeared!

Harley wants to solve it alone but her “Scooby” gang of Harleys won’t take get lost for an answer.

They rope in Red Tool to tail her as they visit Langstrom in Arkham.

Between the two groups someone will find answers (if the answers don’t find them first!) 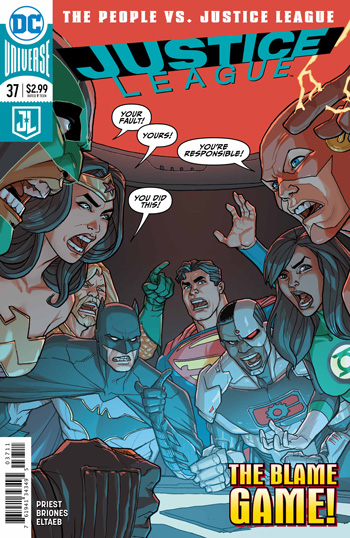 A backstory not that uncommon in a comic book universe.

Kids are around when a super powered battle happens, one of them gets their legs crushed with debris.

With the help of a best friend though he recovers and gets stronger, using the heroes as his inspiration.

He trained like crazy, learned all he could about them and decided to “help out” by assassinating anyone who publicly threatens the JLA. (If you added powers he could be a more disturbed Deadpool, just think of that)

A little kidnapping, blowing up of innocent patrons in a dive bar, dressing up as his heroes to do his public crimes.

All because of twisted admiration. 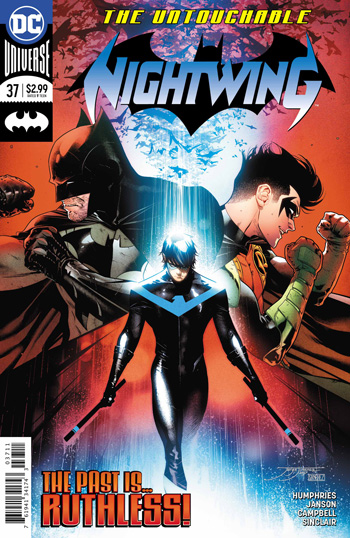 Nightwing reflects on his first encounter with the Judge with someone who was there.

We see fallout from last issue’s dramatic event, the Feds have cut off gambling in Blüdhaven and the casinos are scrambling not to implode, it’s a logical result and refreshing to see in a comic.

Nightwing goes to see Lucy Weatherton, owner of the Lucky Lighthouse Casino but formerly the vigilante Baby Ruthless. She met (and backed up) Batman and Robin on their first jaunt into Blüdhaven, their first time fighting King Sturgeon (Guppy’s dad) and the Judge.

Robin was young and freshly traumatized. They stopped him from making Blüdhaven into a nuclear nightmare, but Nightwing won’t stop blaming himself for the Judge getting away.

Both sides see tonight (next issue) as the night for finally making everything right.

This team put greatly appreciated effort into separating the “present” story from the “flashback” visually, even giving the past a grittier 80’s brush inked flair. 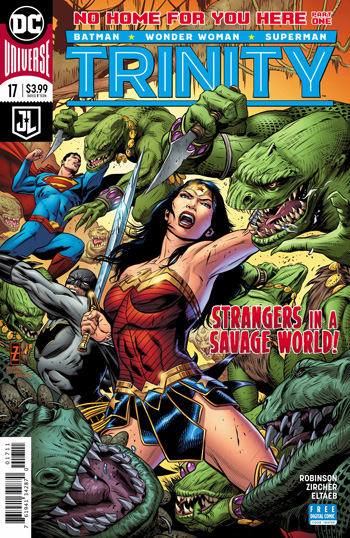 The issue could have (very cornily) been called “No Place Like Home”.

Supes and Batman are helping Wondy with the (maybe hopeless) task of finding a doorway back to Themyscira, but for a friend a goose chase isn’t too much to ask.

And whaddaya know, in the middle of the ocean – a goose! (Actually a giant glowing whirlpool about to drag in a boat.) They save it but get plunked into a “savage land” of shipwrecks and angry lizard man natives.

Not the Amazonian retreat they were hoping for, and the two super powered beings have been handicapped.

But with a guide you’ll recognize if the word Skartaris rings any bells, maybe they’ll find their way home. 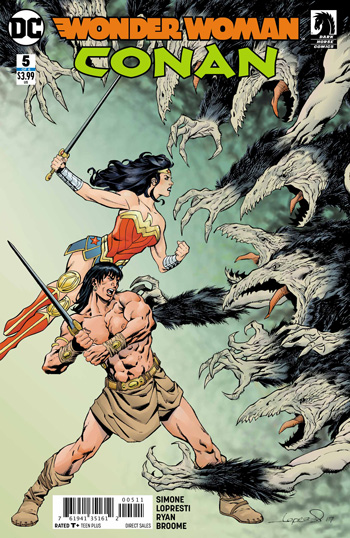 This one’s filled with a lot.

The flashback concludes, young Conan searched tirelessly for days. When he could not find Yanna or her body he returned changed by the trial.

Back on Themyscira, the Amazons have gotten word their princess has been found! The Corvidae send them word (via crow) that they mock their efforts and laugh at their pain.

Conan and Diana race towards the Corvidae trap. They muse on their shared yearning for peace even as they don’t believe they will see it.

A team of Amazons teleport into Shamar and interrogate the Arena Master. But it was a Corvidae trap! (The reader knew he was their toady, so no surprise to us.)

Outside of Shamar (I suspect the Corvidae are just impatient) the sisters surprise Diana and Conan with presents. For Diana – her sisters all strung up for hanging on her golden lasso! For Conan – his dear Yanna’s life! All they have to do to save them is fight each other to the death!

One more issue to go!