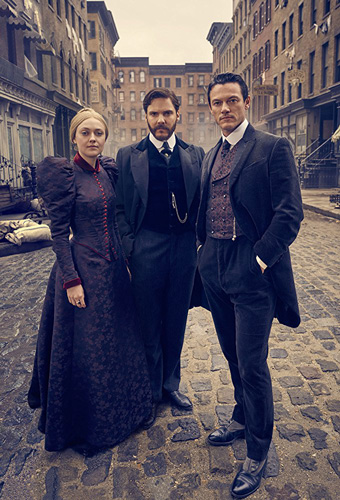 “In the 19th century, persons suffering from a mental illness were thought to be alienated from their own true natures. Experts who studied them were therefore known as alienists.”

Caleb Carr’s 1994 novel The Alienist was a thrilling read about how a Victorian-era psychologist and his fledgling forensics team track a brutal serial killer in New York City.

The murders are as bloody as any committed by real-life killer Jack the Ripper, but he preys on even more vulnerable victims: Children.

In the first episode, “The Boy on the Bridge,” which airs January 22, a policeman stumbles upon a mutilated body that turns out to be a young boy dressed as a girl.

What was disturbing on the page — the victim is found with eyes gouged out, hand chopped off, and entrails exposed — is nearly unwatchable when transferred to the screen.

Just when you think the camera is staying a discreet distance away from the body, we zoom in through one of the dead boy’s empty eye sockets! (All CG, but still.) If I weren’t watching this for review, I might have turned if off. But I’m glad I didn’t.

Daniel Brühl is perfectly cast as Dr. Laszlo Kreizler, who has the brilliant deductive powers of Sherlock Holmes and more medical training than Dr. Watson. He’s zealously committed to protecting exploited and troubled children, which 1896 New York is sadly teeming with. And he’s about a century ahead of his time in supporting a young male patient who’d rather dress as a girl.

Kreizler relies on the expertise of his friend John Moore (Luke Evans), a New York Times employee whose artistic skills are most often used to draw society ladies, instead of murdered boys.

They quickly find a compatriot in Sara Howard (Dakota Fanning), the first woman to work at the New York Police Department. The self-assured Sara, who endures no end of daily harassment at work, proves as devoted as Kreizler and less squeamish than Moore.

Kreizler is convinced that the young Italian victim was murdered by the same brute who slaughtered his young, cross-dressing patient, so he has the body of the first boy exhumed to try to prove his point.

Police commissioner Theodore Roosevelt (yes, the Teddy Roosevelt) doesn’t want to listen to Kreizler’s theories, since he’s viewed as an anti-establishment crackpot by most of the police force. Roosevelt was originally going to be played by Sean Astin, who had to drop out over conflicts with making Stranger Things. The actor who replaced him, Chicago P.D.’s Brian Geraghty, is rather colorless and not at all the blustery, take-charge Teddy Roosevelt of popular legend, but that’s the way the character is written, at least in the first two episodes.

I read the book shortly after it came out, so, nearly 20 years later, I can’t recall how he’s portrayed in the book. It does seem, however, that Roosevelt’s role in this unorthodox pursuit has been greatly downplayed. In the miniseries, the group is assembled by Kreizler, not Roosevelt, although the police commissioner does reluctantly sign off on the parallel investigation.

It’s Kreizler who recruits the bright Isaacson brothers (Douglas Smith and Matthew Shear) to do an autopsy on the disinterred boy, although Roosevelt had the wisdom to hire them in the first place.

The pace begins to pick up when Kreizler spots a suspect and gives chase, only to have the man seemingly vanish into thin air.

In the second episode, “A Fruitful Partnership,” which airs January 29, Kreizler officially invites his new colleagues to join him in pursuit of the murderer.

Things start to click when the team comes together. As one brother enthusiastically tells Sara, “It’s something new: Forensic science married with human psychology.” Despite the gruesome nature of the murders, it’s easy to see why, in 1896, a woman and two Jewish brothers are thrilled at being regarded as equals and asked for their expertise.

Kreizler’s declaration that in order to catch this killer, he must become the killer are fresh to him and his era, but, of course, old hat to viewers. The dawn of a new era of crime-fighting, and its forward-thinking adherents, was what made the novel so interesting. Here’s hoping the series keeps its focus there.

The series is probably on par with another Victorian series, Penny Dreadful, in terms of bloodletting. But it’s a bit harder to take when the killer is human and not, say, a witch, werewolf or vampire. And when the victims are children.

Your enthusiasm for The Alienist may depend on your stomach for extreme forensics. And how many child prostitutes you can stand to see being exploited or murdered. But the cast is uniformly excellent (apart from the bland Roosevelt).

TNT only released two of the 10 episodes for review, but count me in for the whole series.

The Alienist premieres tonight At 9P ET/PT on TNT

In this article:Adaptation, Serial Killers, Television, The Alienist, TV Review