It’s Friday! So let’s talk about some books that you might not have thought of! 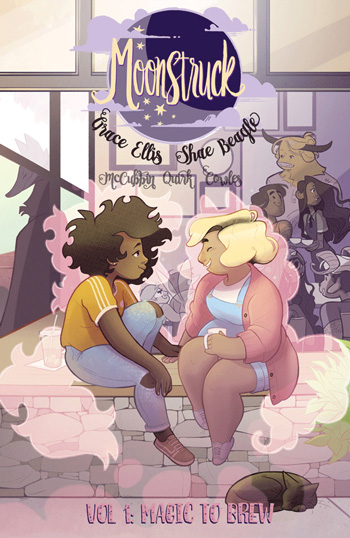 There is something to be said for an all ages comics that can keep your interest. There aren’t many of them in the market. So when one comes along, you can’t help but recognize it. Such is the case with this book here.

This book focuses on a werewolf barista Julie meeting her new friend Selena. They go to a magic show. Then things get out of hand as the magician casts a spell on their friend Chet!

Now the pair have to try to stop the magician’s plans.

But are they up to the task?

Grace Ellis does a wonderful job writing the book Lumberjanes and does the same here. The artwork by newcomer Shae Beagle is pretty darn good as well. Pick this up. It’s a book you can read with your kids! 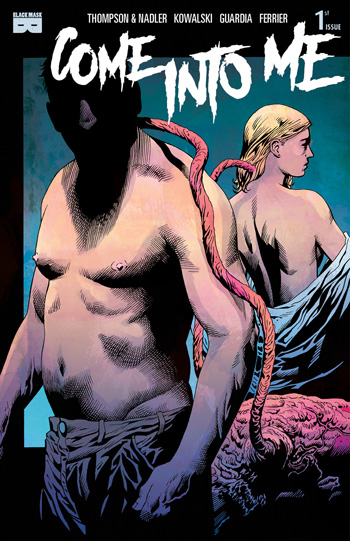 Black Mask continues their reign for putting out comic books nobody else has the guts to do. This excellent book has a strong story right from the get go and doesn’t let up. I was enthralled from the very first page.

An entrepreneur who has a god complex creates some weird technology.

What does it do?

It allows two people to share one body. But there is a gruesome price to pay.

This book is a combination of a Cronenberg film and a Lynch film all rolled into one!

The art by Kowalski is just awesome. He’s one of the best draftsman out there. It’s a shame he isn’t more popular.

This is a great debut. Pick it up. I can’t wait to see where it goes. 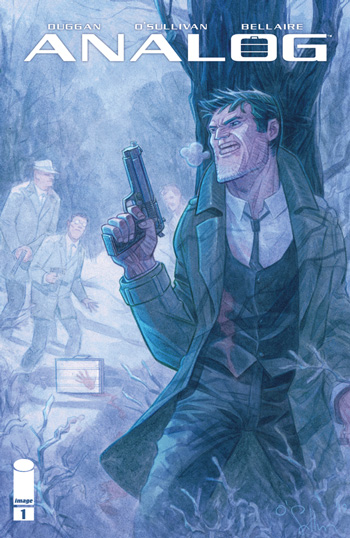 I wanted to like this book. I sat with Gerry Duggan at New York Comic Con and talked about this book. He is clearly passionate about it.

Sadly, I found it very trite and borderline boring.

Duggan is a fine writer but it was a hard time to get through.

This book takes place five years in the future. The internet has been completely destroyed! Enter an armed courier named Jack McGinnis. Jack is a heck of a guy with a secret!

And that secret may be related to the cyber attack that changed the world!

The art didn’t add much to the story. I expected more and wanted more. Maybe it’ll pick up. Right now, I could barely get through it. 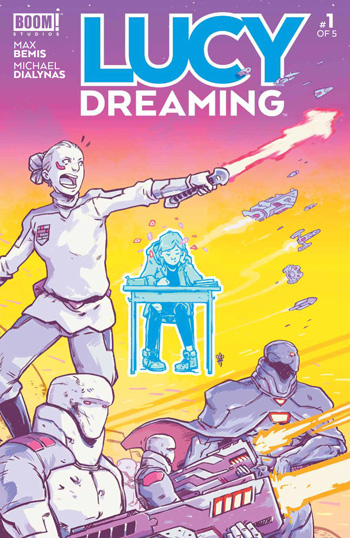 I love the comic book writing of Max Bemis.

From Moon Knight to Centipede, he’s really kicking butt overall. This book is another feather in his cap and I enjoyed it immensely.

This book is about living in your dreams.

Lucy, our heroine, is the hero of all her favorite stories in those dreams. Through it all, she learns more about the real world and herself. The story starts off strong and give us some well developed characters.

The art by Michael Dialynas is great. He did good work on the TMNT and he does even better here.

Pick this up. It’s truly quite excellent. 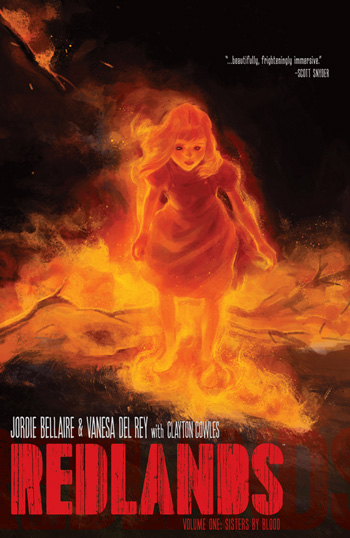 This is one hell of a strange book. Bellaire writes this book and it’s gruesome. I liked it very much but it got confusing at times and a tad difficult to follow. Still, if you stick with it, you’ll be rewarded with some tense scenes and great artwork.

There are witches in the town of Redlands, Florida.

The police can’t maintain the chaos they are causing. And these witches are terrible. They want to own the town and take away everything. What’s going to happen?

The artwork is the star here. Del Rey does killer work and it’s awesome. I will read this book as it’s quite interesting, even if I can’t always follow. Give it a shot. It’s weird but good. 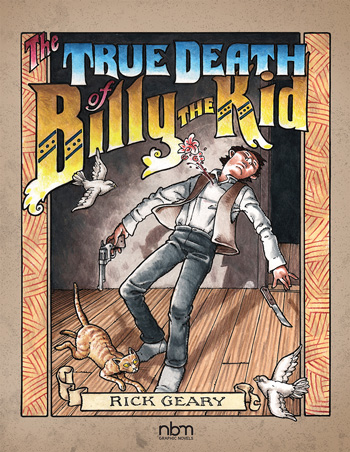 Rick Geary is one hell of a creator that you may not have heard of! He’s been writing and Illustrating great books for a number of years. This book is one of his best. It’s well written, well drawn, and the whole thing is incredibly fluid.

This book is a biography of William H. Bonney’s (aka Billy the Kid’s) life. It shows his charm. It also shows his ruthlessness. Geary makes the story something you need to read as well as something you can’t take your eyes off of.

I do wish there was a few more pages to develop Billy. There are a few elements of his life missing. It’s a minor complaint though. This book is an accomplishment.

Geary crowdfunded this book and he did a wonderful job. The art is great and he’s clearly passionate about that subject matter. Pick this up. It’s an excellent surprise for spring. 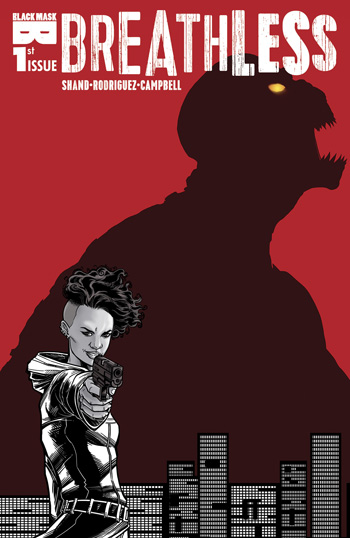 This is kind of a wild book. But what do you expect?

It has a cool concept and some nifty characters. Give it a shot. It’s quirky as hell for sure!

Scout Turner is a scientist who discovers the cure for asthma in the venom in a new breed of monster.

She then finds herself on the run! Monsters are chasing her! A big pharmaceutical company wants her dead!

The story is strong as hell. The art is decent as well. Black Mask makes some of the more interesting books on the market.

Pick this up. You’ll want to read the whole thing! 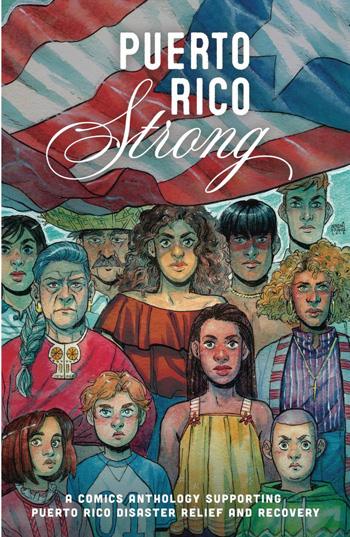 This is an incredible anthology.

Lion Forge has collected a bevy of talent for this book. This is a comic that was done for supporting Puerto Rico disaster relief and recovery.

And it’s a hell of an admirable pursuit.

It’s hard to review a book like this. It’s for such a good cause that I can’t dislike any part of it.

So instead, I will tell you my favorite stories in it: one is Breaking Bread by Tara Martinez and Rod Espinosa and the other is I Dream of Home by Greg Anderson-Elyssa and Dennis Calero.

But they are all great. There is a ton of talent in this book.

Pick it up to read some amazing comics and to support a great cause as well! 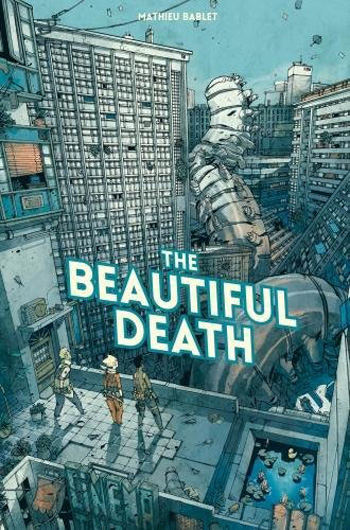 I read this book in it’s original form and I read it again for this review. It’s one of the most beautiful books I have seen from anyone in a long, long time. It’s gorgeous In fact.

The story is great too….right up until the end when Bablet throws it all away for a quick finish.

Insect-like aliens come from the stars to take over the earth.

So now we follow a group of kids as they try to survive the end of the world. And it’s surprisingly deep and even surprising.

Bablet can write as well as draw. It would have been a classic.

Then we get to the end and it all goes downhill quick. It becomes confusing as hell and and is completely inane. Still, it’s a great book until then. Give it a look. The art, again, is amazing. 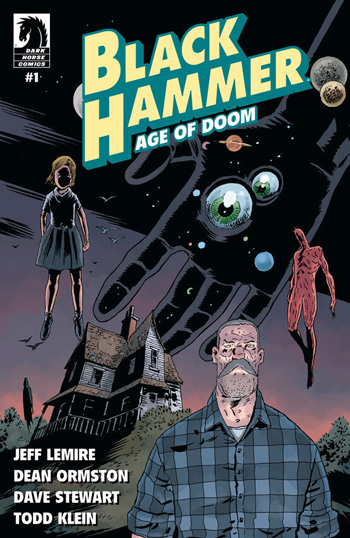 I’m so happy that this series is back. This is one of the best team of characters to debut over the last few years.

Jeff Lemire has created such vivid personalities in this book that you can’t take your eyes off of them. It’s a story that is hard to resist.

This book picks up directly where the series left off.

And she knows how everyone ended up on the farm!

But before she can tell anyone, she vanishes! Now, she finds herself in a crazy new world! And there may in fact be no escape.

The story is a blast. The art by Ormston is utterly spectacular.

You can’t go wrong giving this series a shot. Lemire is an incredible talent and this is just excellent. A must read.