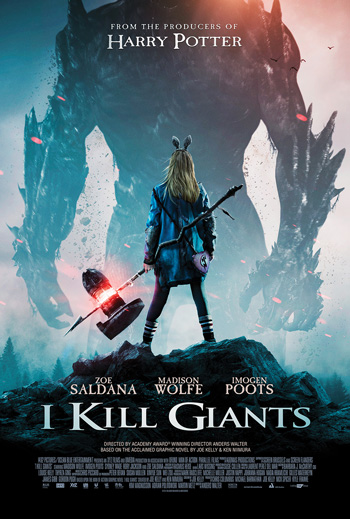 Anders Walter directs an adaptation of one of my favorite and most touching original graphic novels, I Kill Giants written by Man Of Action’s Joe Kelly and exquisitely drawn by J. M. Ken Niimura. Kelly also adapts the screenplay to the film, bridging a gap between page and screen that sometimes gets lost in translation.

Kelly is an amazing storyteller and when news that I Kill Giants was being made into a movie, many thought, “How that could even be possible?”

Like the end of the evergreen Alan Moore / Dave Gibbons classic Watchmen before it, I Kill Giants has the unique distinction of having an ‘un-filmable ending’. The impossibility is no reflection on any storytellers given the challenge, it falls under the category of “how does this get from the page to the big screen?”

There are popular techniques to solve this problem, like the Watchmen changing a major plot point at the end of the movie or another zig zag away from the end of the original story.

I Kill Giants is easily my go-to suggested YA graphic novel. I can’t count the amount of gift copies I’ve purchases in the past ten years. We are talking ‘instant classic’ material here. I had a personal Renaissance and lapsed comics fandom and this was one book that sucked me right back in at a time when I needed it, along with another great another teen comic, Invincible.

I Kill Giants is all heart, in the way that makes the infamous Jack Kirby quote rings true, “Comics will break your heart”.

I watched this movie clutching pillows and comfort blankets, awaiting a wave of emotion that I new would happen at the climax of the movie. …At least I was hoping it would make me suffer “all the feels” of the original comic.

As much as I’ve put family members and friends through this by proxy, I don’t think that I have picked up my copy since it put me to bed. If you are getting a disparaging vibe from my tone, it is the opposite. Some objects are so precious that they must not be toiled with lightly. Barbara, played to the note by talented young actress Madison Wolfe, knows of sacred and special objects that hold power and how to treat them.

Barbara comes off as that kid, that geek, that nerd, that D&D player that gets beat up in school, or at least is a target of bullying. She creates totems to fight off the harassment but is completely enraged and engulfed, day and night, by her primary job.

By setting traps and ensnarements by her seaside town, she takes it upon herself to save the town, everyone in it, her family, her one new friend Sophia and even her bully when it comes down to it. She’ll save them all from giants and The Titan. Her sister Karen, played by Imogen Poots, struggles to take care of Barbara and their brother and all of the household chores including meals while working full time to keep chicken surprise on the table.

Zoe Saldana stars as the school psychiatrist, who of course is trying to break into Barbara’s world, that seems to be closing in on her as the days go by. With the task of defeating Titans and Giants, her schoolwork and home life suffer and her late night jaunts are very dangerous. But Barbara is on a mission, again, to kill giants.

This is a movie for fans of Spike Jonez’ Where The Wild Things Are more than a gigantic open world feel of Harry Potter, but there are elements of both of these kinds of movies in Walter’s debut as a director for I Kill Giants.

I Kill Giants is produced by Christopher Columbus, who prolifically gives us our young adventurer movies like Home Alone, Adventures in Babysitting and the Harry Potter movies, writes the introduction to the most recent trade paperback. The production design is very close to the black and white manga style of Ken Niimura’s art, and I found that extraordinary.

The key art for the movie says a lot about I Kill Giants. It features Barbara, in silhouette, complete with plush bunny ears, about to face an anonymous giant with a magical hammer.

Who among us hasn’t pictured smashing at our problems, at the unknown, being frustrated as well as trying to understand how the world works? Barbara faces The Titan. She faces giants just as we all do, every day.

I grew up in the suburbs, spending my time in a treehouse, reading comics, digging holes, making magical objects out of scraps parts and junk. These were sacred objects to me, and I’ve swung a few dingers at giants off of the cliff where I used to sled. Barbara is all of us misfits, but not in the way we’re always depicted. She harnesses the power of introverted play to cope, but it certainly doesn’t make her any new friends or pleasant to get to know.

With a roll of the 20-sided die, her protection spell might just shield us from the unknown.

I’m going to be recommending this movie, just as I have the source material, for people of all ages, and there will be a wave of reviews more insightful than mine, dancing around spoilers as I have.

If this movie remains a sleeper, that’s fine, I can keep it a secret like a scrapbook, but I hope this movie breaks records and makes a lot of money. Man of Action deserves it, and this is a very impressive debut from freshman director Anders Walter.

I Kill Giants is now playing in theaters and
is now available on Digital HD and On Demand.