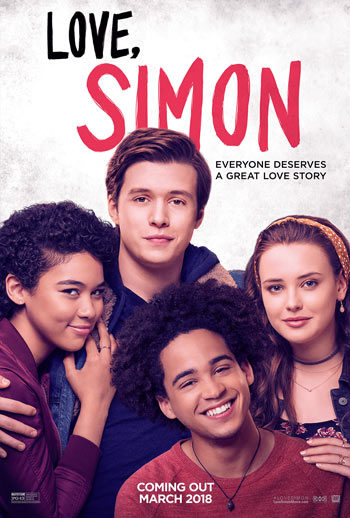 A good rom-com is hard to come by, especially in the teen market.

Everything seems too obvious, too disingenuous, too unbelievable.

But in Love Simon, the plausibility and likability of every element in the love story is what makes it a delight.

Every audience member may not see themselves in Simon, but they’ll feel for his struggle and root for his success as if he were their own classmate.

Simon Spier (Nick Robinson) has a loving liberal family, great friends, and your run-of-the-mill decent teenage life. The problem is, he is keeping a big secret from everyone: he’s gay. When another student posts on an anonymous secret sharing website that he is also closeted, Simon starts a conversation that threatens to uncover his secret. As he faces himself, Simon must also start to think about facing everyone else.

The movie immediately sets up a modern traditional suburban family with two married professional parents (Josh Duhamel and Jennifer Garner) and a little sister (Talitha Bateman) with a charming Masterchef Junior style cooking obsession to show their upper middle class lifestyle. The houses are big but not too big, the vice principal (Tony Hale)  is overeager in his need to be each student’s pal, and Simon has a Benetton ad of a friend’s group with a white female (Katherine Langford), a Latino-presenting guy (Jorge Lendeborg Jr.), and a racially ambiguous charismatic tan female (Alexandra Shipp). It would be so easy for this to fall into a paint-by-numbers trap. But it doesn’t.

The story, based on the book Simon vs. the Homo Sapiens Agenda, was written by powerhouses Isaac Aptaker & Elizabeth Berger (This Is Us and About a Boy). Their ability to pull nuance and empathy is on a much larger stage, but it still feels as intimate as television.

This was especially true of the dialogue, where the banter between parent and son (“This song was big in my day”/”So was Bill Cosby”) feels like an honest exchange instead of an endlessly workshopped line. They have created characters that feel like you have known them an hour at a time over the course of weeks, not 45 minutes ago. It’s rewarding, and makes you wonder how each character is doing well after the film ends.

Duhamel and Garner have an easy chemistry with her taking the intellectual and emotional lead but not simply leaving him to the “completely clueless dad” role. The dynamic between the friends is a classic with crushes, obliviousness, and the kind of vulnerability you need in a teen romance to help remember that every decision or slip up feels like a world-ending situation. Luckily, Robinson (and all teen co-stars) gives us that show without a single hitch. His heartfelt performance in particular makes you look forward to whatever the next project may be.

The journey to Simon’s truth in the context of friends and family is a touching story that is sure to start conversations and confessions. It has the power to move, but in a nuanced way that softens the sharp reality of facing something you’ve hid for so long.

Love Simon is exactly what you’ll do the very moment you get to know him.

On Lynda Carter, J.K. Rowling, and Living Up To Your Fictional Heroes