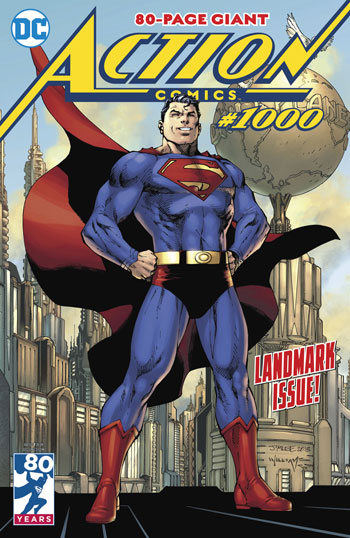 It’s the issue that started it all. It’s the first appearance of Superman and that first appearance? It changed the comic book landscape forever. Everything that followed owes a nod to that book.

Now, here we are. The 1000th issue. DC Comics decided to celebrate the milestone in the right way.

This is an oversized issue featuring tons of amazing talents. From Tom King to Geoff Johns to Tim Sale to Scott Snyder. This book is jam packed with some of the best talents that have ever worked on Superman.

To be honest, the first story out of the gate is a tad lame.

Dan Jurgens writes and draws a story about people in the DC Universe having a “Thank you Superman” kind of event. It’s a groaner. I understand why they started off with this story but it doesn’t really work.

Happily, Peter J. Tomasi does a killer job with Patrick Gleason on the next chapter. I loved this story. It had tons of nods to Superman classic tales over the years and the pair just cut loose. It celebrates Superman’s birthday and it’s perfect. They are an awesome creative team and it really shows here.

Then the book just keeps getting better and better. Marv Wolfman has a short story he writes with previously unseen Curt Swan art. It focuses on Maggie Sawyer dealing with a hostage situation. It’s fantastic.

The same can be said for Paul Levitz writing a story for Neal Adams to illustrate. It focuses on a game of chess between Superman and Lex Luthor. Brilliant. This one is a keeper and it’s the best thing Adams has done in years.

Geoff Johns writes a story with Richard Donner that is just fantastic. It’s about the car from the first Action Comics cover. This one is illustrated by Oliver Copiel.  What a cool story.

Louise Simonson and Jerry Ordway have a good tale in there about five minutes of Superman’s life working at the Planet and dealing with being a superhero.

Tom King and Clay Mann have a story in there about Clark remembering his parents.

Scott Snyder and Rafael Albuquerque do a story about Superman and Lex meeting up in the Smallville Planetarium. It’s pretty sweet.

Paul Dini and Jose Luis Garcia-Lopez have a fun story about a ride about Superman at a park. It’s funny and inventive.

The two last stories are best.

Brian Michael Bendis and Jim Lee create one hell of a Superman story that leads into their new run. It’s Superman and Supergirl fighting a new foe. We also get a return of the trunks here. It’s awesome and sets the stage for some exciting stuff.

The best story for me that captures the anniversary perfectly is Brad Meltzer’s story with the John Cassaday art. Its about Superman trying to save a woman and he fears he may fail. It’s simple and just stunning. They deserve a run of their very own. It’s the best one in the comic for sure hands down.

This is a great comic book. It’s also an important piece of history. Buy this and read it and cherish it.

Superman has been around for a long time.

Yet, these stories make him feel as fresh as he did when he first debuted in 1938.