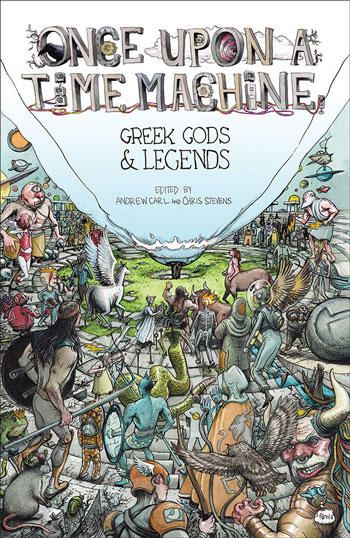 They say every issue of any continuing series is somebody’s first so it should always be accessible. This is why Roy Thomas always had the members of the Avengers or the Invaders or the All-Star Squadron always call each other by name in the first couple pages.

It’s why some modern comics denote the inside front cover to recent plot exposition to bring the reader up to speed.

It’s what’s conspicuous by its absence from Dark Horse’s Once Upon a Time Machine, Vol. 2.

For one thing, not having seen nor heard of Volume 1, I had no way of even knowing this WAS Volume 2 from the front cover which omits any hint of this not being a stand-alone book.

Subtitled “Greek Gods and Legends” in a rather shaky font and with a main logo that’s a little hard to make out, the dense cover illustration (which is repeated throughout the book in case you missed it) shows a conclave of mythological figures and space aliens all fixated on…something. As you might have guessed, this book is not exactly making the best first impression it could as far as I was concerned.

I must admit that it even took me a while to figure out exactly what the book was supposed to be, mind you, as there is zero introductory material to familiarize new readers with the concept. Oh, there is a brief note on the title page referring one to a website to find out more about the book. While extras like that are a plus, a book should be self-contained. The back cover describes the concept briefly.

Oh, by the way, with the exception of one story, there’s no time machine in this and not exactly any Greek gods either.

All that said, I don’t hate Once Upon a Time Machine. Once I figured out that the gist of the project is to do science-fiction updates on the classical Greek myths in a wide variety of art styles, I found myself actually enjoying some of the stories and single page “pin-ups.”

A problem unique to this particular volume is that your enjoyment of it is largely dependent on your familiarity with Greek mythology. I, myself, was really into the Greek Myths at one time, that time being when I was in the 7th grade. Sadly, that was a long time ago now. So while I know pretty well the stories of Perseus, the Argonauts, Odysseus, Icarus, Persephone, and a few others, much of the rest has been filed away in long forgotten memory in a distant corner of my brain.

Another problem with any anthology is that it’s rare that the same level of quality is maintained throughout and any standout stories inevitably make the lesser ones look even lesser. There are 30 pieces in this book. There are 9 that I consider to be standouts.

Nearly all of the many writers and artists on view here are new to me. An exception is the always reliable Mike Baron, co-creator of Nexus! Along with artist Jeff Johnson, Baron here tells us the story of “Pegasus,” the flying horse, done up as a sort of parody of Shaw Brothers martial arts flicks from the 1970s. It’s about the most mainstream looking story here, professional and fun but nothing really special.

A little heavier is the previously noted single time machine story, “Icarus” by Andrew Carl and Gideon Kendall. This is the first story in the collection and retells the story of the man who ignored warnings and foolishly reached for the forbidden with tragic results. Okay, off to a good start.

Up next, though, and on the other end of the scale is the story of “Theseus and Metrotaurus” by Ronald Wimberly. I love everything about the more experimental art and coloring on this story and yet it’s thoroughly incomprehensible to me. Something about swordfighting a bullheaded creature in the Subway? Maybe? Who knows? But it sure is fun to look at!

Adam McGovern and Paulo Leandri (along with Dominic Reagan and Steve Price) do the story of Hermes, another good one, this one with some very traditional, Kirbyesque art.

Lest you think I just prefer the more “normal” looking pieces, one of my favorites in the entire book is the two-page mixed media spread of a cybernetic “Arachne” credited to Maëlle Doliveux.

Another favorite story is “Eurydice,” written by Josh O’Neill and with art and letters by Toby Cypress.  The coloring here, although not specifically credited (so it may also be Cypress) is once again outstanding.

Bringing some much-needed fun back to the proceedings about halfway through is “Away Mission (Actaeon)” by Andrea Tsurumi, the story of two friends who meet up every five years, with one of them changing a LOT every time. The artist’s storytelling is easy to follow and the ending is fascinating.

Some of the many artists here seem to purposely invoke Moebius, or Mike Mignola, or Stephen DeStefano, or a modern American animation style. Others really do bring what looks to my eyes to be completely original styles but not always with good storytelling.

If you enjoy anthologies like this just to see a mix of styles, well, here’s one. If you’re up on your Greek gods and legends, that will most certainly add to your enjoyment of it. If you don’t know Pluto from Uranus and just like cool art and good sci-fi, you’ll find some of that here in spots as well. I just wish the package as a whole worked for me.

As it is, I don’t feel like I can actually give Once Upon a Time Machine Vol. 2, my full recommendation.