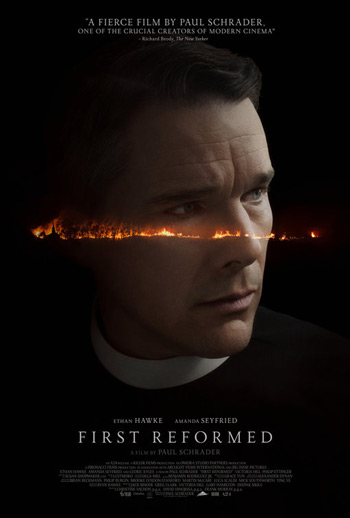 In Paul Schrader’s powerful First Reformed, Ethan Hawke delivers a career-best performance as Reverend Ernst Toller, a deeply spiritual man with a tragic past, a barely existent flock and failing health. (The character’s name is surely a reference to spiritual teacher Eckhart Tolle. And it’s no mistake that all the supporting characters — Mary, Michael, Esther — have names straight out of the Bible.)

A disaffected taxi driver and a reverend at a small, sparsely attended church in upstate New York would seem to have little in common.

But both Travis Bickle and Ernst Toller are the creations of writer-director Paul Schrader and they share the same malaise and bone-deep despair over the state of the world.

Speaking at a Q&A at the Aero Theater in Santa Monica, CA. on May 10, Schrader admitted he hadn’t realized how similar his new film is to Taxi Driver — which he wrote and Martin Scorsese directed — until he was editing it.

It’s misleading, though, to equate Schrader’s new film too strongly to Taxi Driver. It’s more of an heir to Ingmar Bergman’s Winter Light, about a priest suffering a crisis of faith, and the films of Carl Dreyer, both of which Schrader mentioned as influences.

Toller is the reverend at First Reformed, a historic church that’s become little more than a tourist attraction. It’s overshadowed by its parent church, the 5,000-member Abundant Life, whose opulence and modern attitude don’t sit will with the old-fashioned Toller. That’s presided over by the far more practical Pastor Jeffers (Cedric Kyles, aka Cedric The Entertainer), who is losing his patience with Toller. (Kyles delivers some of the film’s funniest moments, but there’s surprisingly more humor than you’d expect in a film about a conscience-stricken man of the cloth.)

At the film’s beginning, Toller starts writing a journal, one that he intends to keep for a year. The journal promises to be uneventful — until parishioner Mary (Amanda Seyfried) asks him to counsel her husband, Michael (Philip Ettinger), an environmental activist who was recently released from prison because Mary is pregnant.

Toller’s conversation with the deeply depressed Michael is a challenging one, but — as we learn from Toller’s narration, which breaks in at key moments — the reverend finds it the most stimulating thing that’s happened in years. Although Michael isn’t religious (Mary is the believer), he’s convinced that bringing a child into this doomed world is a sin. His office is plastered with photos of murdered activists and charts predicting earth’s sure path to destruction.

It’s a bracing conversation for the audience as well. Do we embrace hope or despair? Can we acknowledge both at once? I was bored to distraction by Silence, Scorsese’s epic about priests in feudal Japan, but Schrader’s spiritual discussions, which are rooted in the here and now — will surely resonate with any viewer, regardless of their religious beliefs.

Michael’s doubts spark a spiritual crisis in Toller, particularly as the 250th anniversary of First Reformed draws near. It’s being sponsored by a rich businessman, one whose practices are hardly earth-friendly and Toller is having a hard time keeping his reservations to himself.

I’m reminded of Miguel Arteta’s Beatriz at Dinner, where a healer (Salma Hayek) finds herself face to face with the embodiment of rapacious capitalism (John Lithgow). Toller faces a similar dilemma: To act or to simply do nothing?

The film takes a rather loopy turn in the third act, one that requires some faith on the audience’s part to accept. But it’s one more aspect of the film that should spark lengthy conversations. It’s a film we’ll likely be talking about for a while.

And, ideally, it should inspire anyone who hasn’t seen the films of Bergman and Dreyer. Bergman’s Winter Light and Dreyer’s Ordet, Day of Wrath, and his silent masterpiece, The Passion of Joan of Arc are currently on Filmstruck. (Schrader’s Mishima is on Filmstruck, Taxi Driver is streaming on Hulu.)

After some recent misfires like The Canyons, First Reformed is a welcome return to form for Schrader.

Hawke’s exceptional performance as Reverend Toller is likely to net him a third Oscar nomination. It’s a bit of a stretch, but I like to think of it as an extension of his underrated turn as a shaky, alcoholic sharpshooter in the otherwise forgettable Magnificent Seven remake.