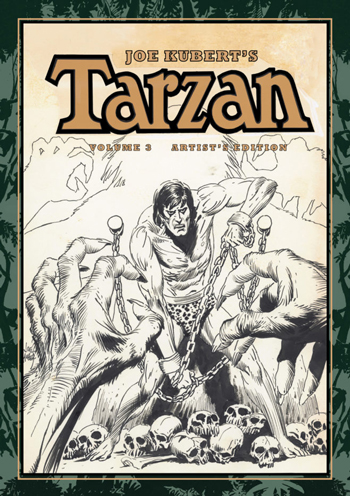 Joe Kubert’s Tarzan and the Lion Man Artist’s Edition is the latest example of a review proof book from Scott Dunbier and the fine folks at IDW. If you’re a Tarzan fan, you’ll probably love it. If you’re a fan of Joe Kubert, it’s a must-have double bag item (although you’ll need a big bag!).

I grew up a fan of the Johnny Weissmuller Tarzan films that were on TV every week throughout the 1960s. I also enjoyed Ron Ely’s radically different, Jane-free Tarzan adventures on his then current Tarzan series.

What I did NOT pay a lick of attention to, however, were Tarzan comic books. Not sure why. I remember seeing them around and I certainly didn’t have any aversion to Gold Key comics.

Thus it was, then, that the very first Tarzan comic book I ever actually bought was DC’s first issue in 1972, which also happened to be Joe Kubert’s first Tarzan story.

I confess to not having been a big Kubert fan before that. At a time when the smoothness of a Gil Kane or a Wally Wood, or the pure power of a Jack Kirby, was my idea of artistic perfection, Joe’s work just looked scratchy and almost unfinished to my untrained eye.

But for some reason, I decided to try DC’s Tarzan—Joe’s Tarzan. And I loved it! I seriously did. I could forget all the decades of issues I’d never seen from Dell and Gold Key and even Charlton and just start fresh here, introduced anew to my old Jungle King friend and for the first time, really, to the greatness of Joe Kubert’s art.

Which brings us to the book at hand. As always with this series, the pages in Joe Kubert’s Tarzan and the Lion Man Artist’s Edition are displayed to showcase their artwork, not for their stories. They are reproduced in the most detailed facsimile images to the original pages as modern technology allows, leaving intact any evidence of blue lines, marginal notes, paste-ups, screens, etc.

While the reader can spend literally hours checking out Kubert’s linework and page layouts and figuring out the thinking behind various artistic choices, one can also admire his simple mastery of facial expressions and physical anatomy. And yet, in his introductory remarks, Joe’s son Adam writes that, “This was Dad on auto-pilot… the pages you see here are him thinking out loud.” Adam adds, “This was Dad at his prime…and his prime lasted his whole life.”

Even if he had never started the well-known art school named for him, Joe Kubert’s importance in the history of comic books had long since been assured by work like this. Devouring the original art pages in Joe Kubert’s Tarzan and the Lion Man Artist’s Edition is all the proof anyone needs that Kubert was as good as it gets.