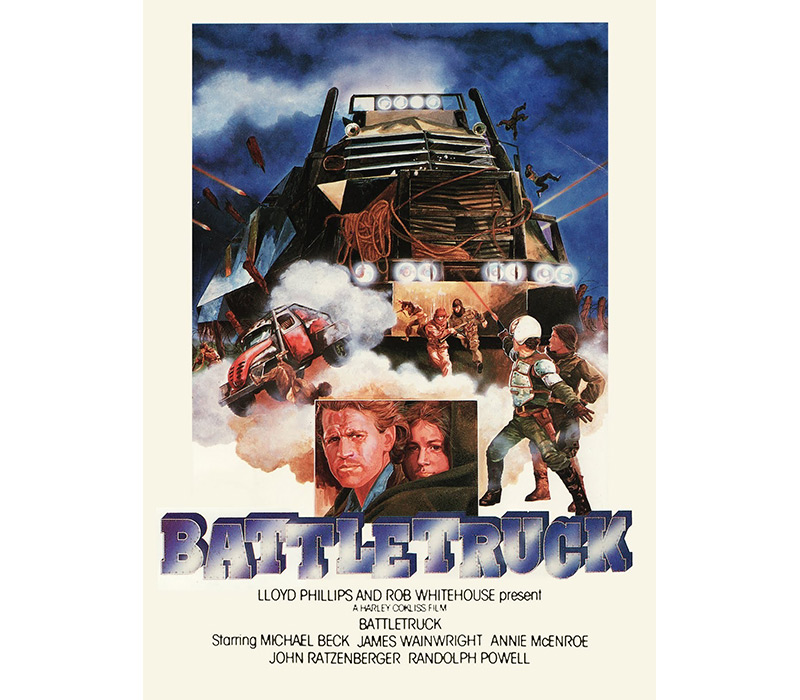 Shortly after Road Warrior was a hit in Australia in late 1981, Battletruck got commissioned in nearby New Zealand. It was planned, written, shot, and released within months.

The titular armored tractor-trailer looks good, but it scarcely figures into the action until the climax. Michael Beck (The Warriors) is likeable, but he looks too lithe and elfin to play a gritty motorcycle loner.

Still, if you don’t expect too much, you can enjoy the bleak landscapes and roadscapes. Bonus: John Ratzenberger from Cheers plays a sweet mechanic. 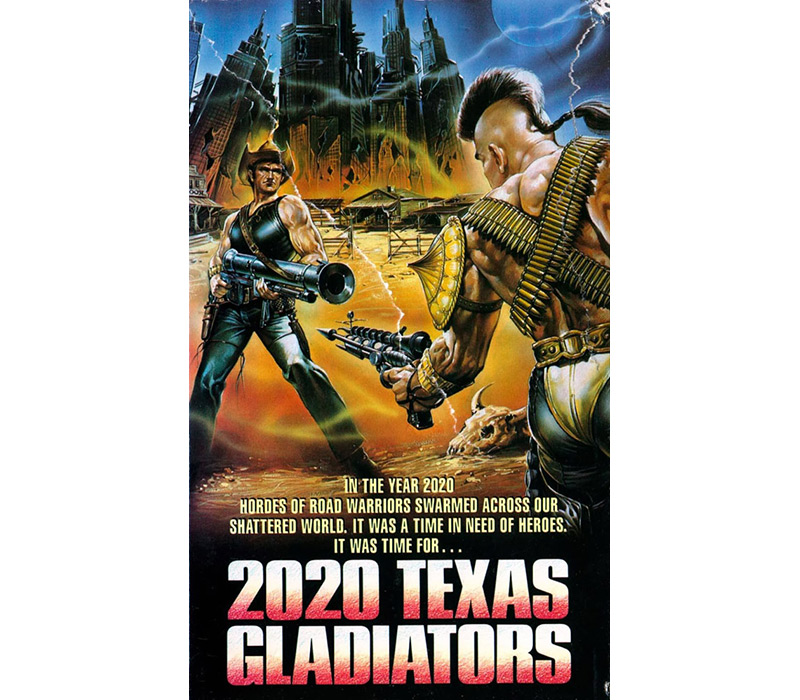 This is the first of two imitators from exploitationer extraordinaire Joe D’Amato.

It’s a rare exception (maybe the only exception) to the “tragic loner hero” category, since it’s a band of good guys (five of them) rather than a single good guy even at the start. Some are killed along the way, but we’re still left with more than one good guy by the end.

With D’Amato at the helm, you won’t be surprised at finding multiple rapes, cut throats, sleazy gore, even a crucifixion. It’s probably the most exploitative of all imitators, rivaled only by Wheels of Fire.

Most vehicles are dirt bikes, but there’s an armored truck and a shark car in one scene. The music is especially good during the (many) action scenes. Actually the whole thing is pretty good as long as you’re in the mood for sleaze.

Trivia: it was co-written and co-directed by D’Amato’s longtime partner George Eastman. Both guys are Italian, using English pseudonyms.

WARRIORS OF THE WASTELAND 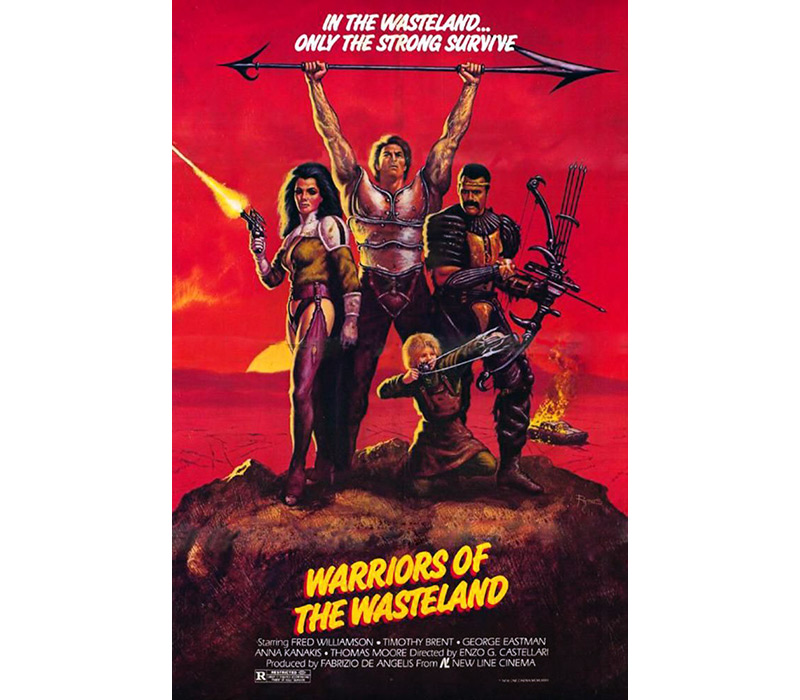 This one boils it down to the essentials, so much so that we never feel we’ve moved more than a mile from the original locations in the first scenes.

It’s basically one black-clad loner hero and his one friend fighting a small gang of evil gay long-haired rapist thugs.

The dessert setting is simple. The vehicles are small but fast, like dune buggies. Action comes often. It’s about average all around for a Road Warrior imitator.

Enzo Castellari also directed the great 1990: The Bronx Warriors (1982) which is more of an Escape from New York imitator. Both Bronx Warriors and Warriors of the Wasteland feature the flamboyant Fred Williamson (Black Caesar) in a prominent role.

EXTERMINATORS OF THE YEAR 3000 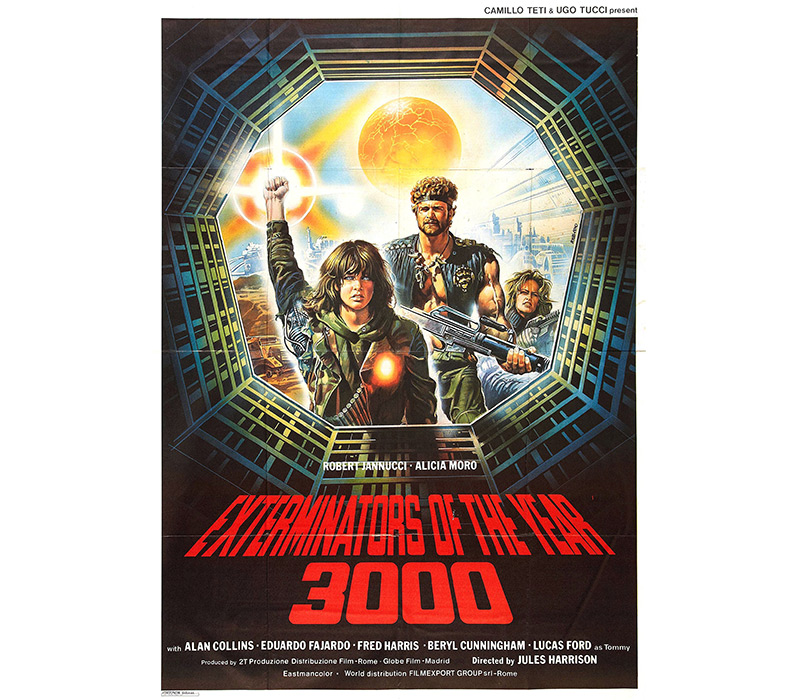 “Exterminators” refers to vehicles, not people, and appropriately the movie has some of the best vehicle action in the subgenre.

Get yourself past the derivative plot, the simplistic dialogue, the routine score, the cheap film stock, the dull locations, the poor acting, the out-of-sync dubbing, and everything else, and then get into the road action.

I usually dislike slow motion, but I sure liked it here during the vehicle crashes. You can watch windshields shatter.

The hero’s “Exterminator” has cages around the fenders to protect the tires, plus spikes, side armor, and a bulletproof slat shield.

The loner hero befriends an adolescent boy, so the movie is almost family friendly. 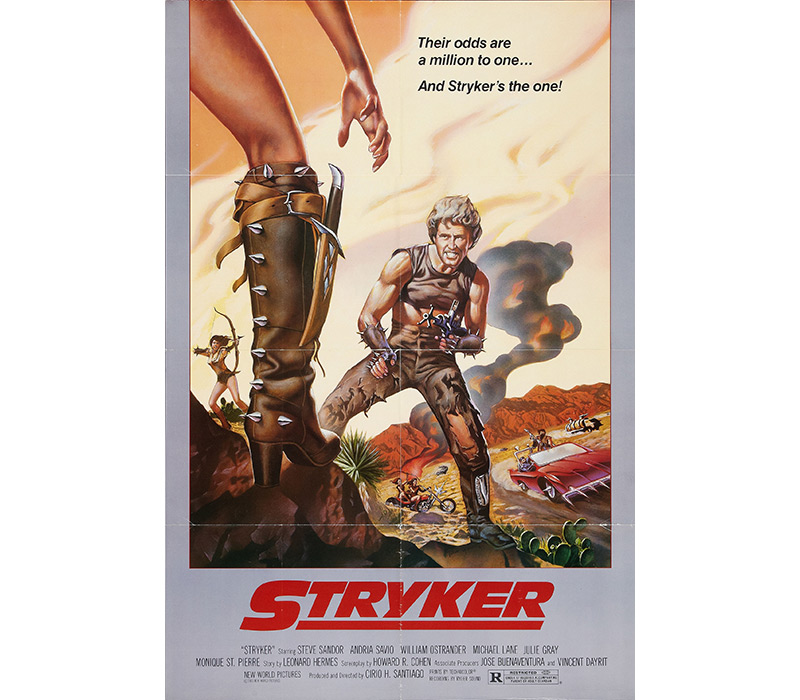 Cirio H. Santiago directed a total of six (!) Road Warrior imitators through 1992. This was the first.

Action scenes – mostly shootouts – come so often that you can’t always tell who’s attacking whom or why. But Santiago is an action specialist, so the scenes are well staged.

The total vehicles are just a few jeeps, a tanker truck, a couple of motorbikes, one muscle car, and two small tanks. The small tanks, borrowed from the Philippine army we presume, are the most memorable.

Some brief gore comes early, and a rape with brief nudity comes around halfway, yet it’s more like an action-adventure film, not an exploitation film like Santiago’s Wheels of Fire (see next column).

Steve Sandor played a lot of supporting tough-guy roles over the years. He wears a cowboy hat for almost the whole of Stryker, and he really does use a machine gun one-handed (in a late scene) like in the promo posters.

Though a Philippine production, it was co-written by Roger Corman collaborator Howard R. Cohen and distributed by Corman’s New World Pictures.