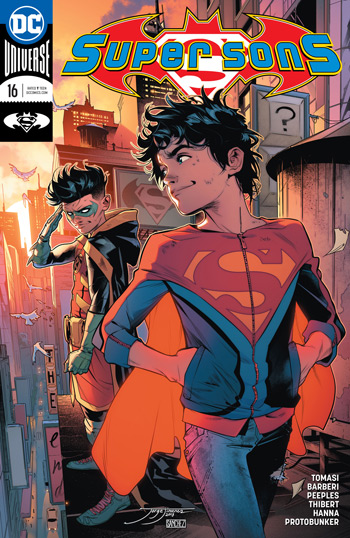 This is the second part of a two parter where the Super Sons have to save the world and the Justice League themselves from Kid Amazo. It’s also the final issue of the series!

Though not to worry, there will be a new Super Sons title in August.

Well, it starts off great with a cool Jorge Jimenez cover. Then, we delve into the issue. An older man is telling this story of the Super Sons to his grandkids. It’s a nice framing device that is used well.

Then, we flash back. We get to see Kid Amazo and the Super Sons in their conflict. And it’s a good time.

The book is about Jon and Damian working as a team. And these two characters couldn’t be any more opposite.

Yet, Tomasi makes them work together and work well. The dialogue is snappy and the book really moves well.

The conclusion is what you would expect. It’s nothing Earth shattering or groundbreaking. But it is entertaining at the very least. I will say, there are some seeds that were planted in issue number one that come full circle here. It’s impressive to see Tomasi had a plan all along.

The art is decent by Barberi and Peeples though I feel we have seen better on this title. Still, it’s well paced and holds your interest.

This has been a nice little run for Superboy and the Damian Wayne Robin. They seemed an unlikely pairing to star in a title. Yet, good writing and fine characterizations prevailed. I’ll be reading the new series come August.