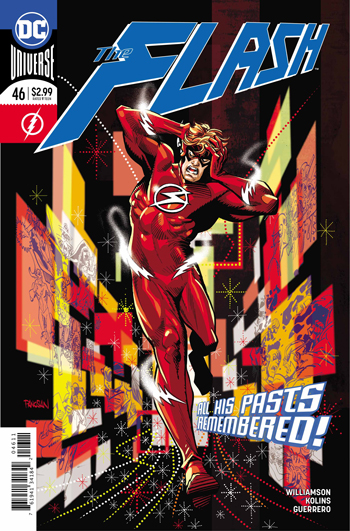 The Flash War is coming!

Ever since the return of the original Wally West, DC has faced the conundrum of what does it mean to have two Flashes running about.

With the recent proliferation of speed powers in the Flash comics, and the seemingly unending flow of DC hero sidekicks, offspring, and other iterations, that concern may have dissipated in urgency for many.

But the question still remains.

Almost as if Wally’s still a step out of synch with the current DCU.

It’s hard to say whether that dissonance is going to resolve conclusively, or not at all in the coming run, but it’s fairly clear writer Joshua Williamson is going to have as much fun as possible threshing it out.

It’s unclear really what circumstances would set Wally and Barry so at odds with one another that they would actually go to ‘war’ with one another. Despite recent tensions, the bond they’ve shared since Wally’s youth is one of real mutual respect and admiration – at least it has been since Barry’s memories of Wally have returned. Of course, those memories don’t include any of Wally as the Flash. And Wally’s own memories are causing him real problems, as he finds himself dislocating mentally in and out of the current DC universe and his old one.

And while we may not know the circumstances that will drive this once mentor and pupil team to conflict, we do now know the cause – none other than the evil machinations of the Reverse Flash of the 25st century, naturally.

True, true. But thankfully just as there are two Flashes in the DCU there are also two Reverse Flashes – one for Barry, and one for Wally. Eobard may be gone, trapped in a hellish existence of eternal dying, but Hunter Zolomon (otherwise known as Zoom) is still with us it seems, and in this issue of The Flash, Williamson brings him back onto the main stage with a story that updates for us where’s he’s been, what he’s doing now, and why his warped lunatic version of the Flash heroic legacy promises to be a big danger for our two scarlet speedsters.

Sure, it’s a little crazy. But given the typical Flash wheelhouse of mirrors, reflections and multiple realities, timelines and dimensions, it actually makes plenty of sense. And it’s a great hook to set up the sort of epic conflict that Barry, Wally, and perhaps the whole of the DCU needs, to settle some issues and perhaps bring everything into brand new alignment.

Williamson’s script deftly manages all of the potentials pitfalls of his plot, with dialogue that as always is clear and honest. And, Scott Kollins pencils are an added treat, recalling to those of us who fondly remember it, his and Geoff John’s classic run of The Flash starring Wally West back in the early 2000’s. Good times.

It’s a great lead-in to what promises to be a wild run. Flash War is almost here everyone! Hang on to your wristwatches.