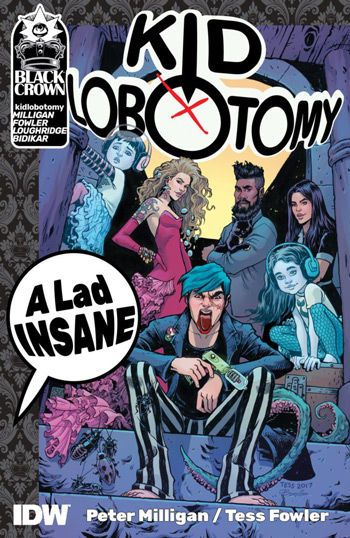 This book seemed like it could be interesting. I liked iZombie the comic series and this seemed to be along the same lines. Sadly, it was hard to read and digest. I got bored instantly.

It’s such a shame, too. It had such promise and Milligan is a really great writer in general. It just got weird for weird’s sake quickly.

In the opening scene, Kid Lobotomy is performing brain surgery. Then, he decides to eat the brains of the person to get to the grey matter.

It was only downhill from there. There are flashbacks and all sorts of time displacement. The plot has to do with the Kid taking over a hotel from his childhood and turning into a lucrative business. Or at least, I think so.

I stopped caring about where I was and who I was with after the first few pages.

Eventually, Kid Lobotomy is guided by a big cockroach and the spirit of Franz Kafka.

Instead of being smart, it ends up just being pretentious and gag inducing.

The plot is all over the place. It’s hard to tell what Milligan was going for. He and Fowler don’t make for a good pairing. Milligan seems interested in making comparisons to King Lear and Fowler seems to want to entertain.

The art is very good. It just doesn’t fit the story. It seems simple, but it’s actually very involved. Fowler is a talent who shines here.

The ending of this book just falls flat. I have no idea if it got cancelled or what the heck happened. It’s abrupt. But maybe it’s for the best.