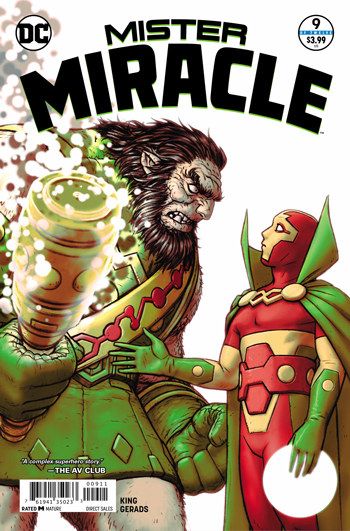 One of my favorite new comic book series of the last year continues here.

It’s been a hell of a joyride up to now and this issue continues the fun. Tom King and Mitch Gerads have taken this character and pumped him with new energy and life. It’s to be commended.

This issue starts off with the war between New Genesis and Apokolips has ended. Mister Miracle and Kalibak must sit down and come to a truce. It’s starts off with Day One and continues throughout. They sit at a long table and debilitate. And it’s hilarious and awesome.

That’s pretty much the whole issue going from Day One all the way to Day Seven.

In between there are a lot of great character moments. The funniest one for me  comes early when Scott asks if there is a “restroom. Or something.”

King makes this scene very naturalistic. The humor comes from it being the participants in the room saying these lines. It’s some great deadpan humor.

My favorite scene comes on Day Three with Scott and Barda on the roof. They talk about how long it is all taking. It’s a nice moment and King allows the two characters to reconnect. It also shows he is not afraid to let the characters breathe.

One of the most horrifying things is when Kalibak hands Scott a gift. It’s a moment that made my skin craw for some reason and is quite dark.

The issue ends with a great set up for the rest of the series. Gerads did a great job again here too. The expressions are amazing and the panel layouts are strong. There’s nothing like this on the stands. And that’s a great thing.