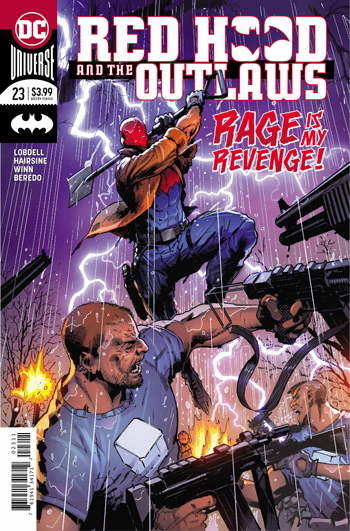 I love the first page splash page in this book.

It has the Red Hood surrounded by Penguin’s goons who all have guns.. It’s raining. There’s lightning. The Red Hood is holding a shovel. It’s beautifully drawn by Trevor Hairsine.

And the only line on the page is from that Red Hood saying “Not a good night.”

And then, he launches into action!

Then, we have a flashback. Jason Todd is sitting around reading a letter from his father, Willis Todd. We get to see Jason’s parents from the past and get to know them a little. The letter talks about his father’s hopes for Jason. It’s the first time we get to see their backstory and it’s rather moving.

Jason gets a gift of a picture of his father and him as a young boy.

It’s the most emotional moment I’ve seen in comics in a long time. Lobdell handles this so well that it doesn’t get overly sappy. It’s a real beautiful moment.

Then, we cut back to the present time and it’s back to the fight between Jason and the Penguin. It has a stunning turn and a stunning moment which shows just how tormented the Red Hood is. It’s a dark and brutal turn. When the Red Hood screams, you feel his pain.

The art by Hairsine is some of the best of his career. He can do action for sure. But when those emotional moments hit, you can feel the pain.

This is my favorite issue of the series. It ends on a somber note and it’s just perfect. After two years on this title, Lobdell has written his best issue yet. Recommended.