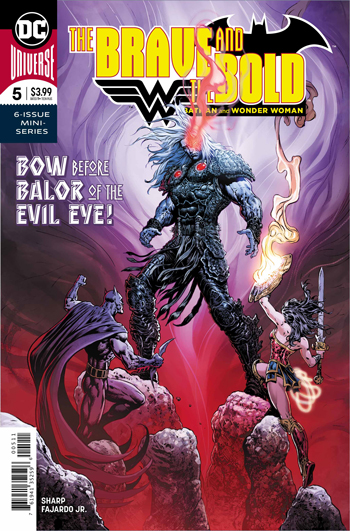 Written and Illustrated by Liam Sharp
Published by DC Comics

When deciding which comics to review this week, I thought, “Hey, gimme something Brave and Bold!” It will most assuredly be funny, if not maybe it will be serious, but not TOO serious. I was looking for something of a light appetizer before I crammed through the rest of my stack.

There are certain things I didn’t realize before I cracked open this polybag, however. This is part 5 of 6. No worries, I’m an expert comic book fan, I’ll be able to piece this together!

I was wrong! Luckily I had the other four issues lying around to get caught up.

This is not your typical Batman and Wonder Woman story!

Sure, they were just battling monsters for years in the main Batman book together through some timey-wimey nonsense, but here we have an entirely different kind of story!

I’ve yet to read a DC superhero comic that goes this hard into specific mythology since Perez on Wonder Woman. We’re on the fifth issue of Batman and Wonder Woman being stuck in Tir Na Nog, translated as “Land of Youth” in Irish mythology. The heroes are brought to this realm to solve a dispute and a murder mystery between two local factions.

This story is part Elseworlds (though these are the traditional DCU in-continuity heroes), part Game of Thrones/LOTR and a healthy dose of what pulls you in to great Marvel Thor runs. With the backbone of the story being based on Irish mythology, there is a bit of a different, Celtic flavor but with the DNA of a great Conan The Barbarian story. Wonderful creatures, artifacts and magic throw Batman for a loop, as Diana is more used to these strange apparitions.

When Balor of the Evil Eye from the cover reveals himself, it ramps up conflict for a battle in the final issue to be revealed!

By the title I thought I was going to get to review a comic with a hilarious Aquaman or another tale of the Music Meister. That’s not THIS The Brave and the Bold. Don’t let my ignorance color your reaction to this review or this comic! I think this is great!

I highly recommend this book for those looking to drop Batman into your next D & D module!

There are a lot of great pages from writer/artist Liam Sharp here in these issues. Batman gets to use his logic as well as a magic totem he’s found to help solve the murder. Wonder Woman isn’t the focus of this particular issue, but her diplomacy is conducting a smart mission for her and Batman while she mediates conflict between the citizens of Tir Na Nog. I look forward to this arc’s epic conclusion.