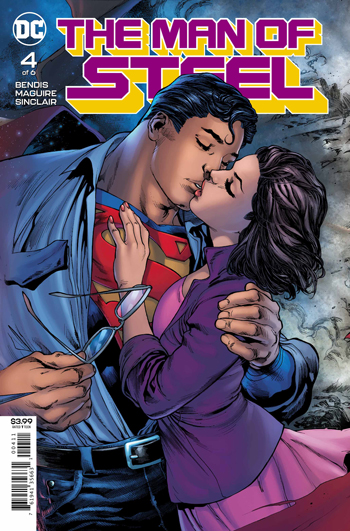 All of the previous issues have led up to this spectacular issue.

Superman and Supergirl have a brawl with Rogol Zaar!

It starts off awesome and then it goes into some pretty dark places. Clark knows he has to get this creature off the Earth and he spends the first part of the issue trying to figure out how.

While he’s fighting Zaar, Clark tries to size him up. I love the way Bendis plays Clark in this scene.

He has no idea who Rogol Zaar is, not even his name. Yet, he makes Superman strategic in his thinking. It’s quite a different take for what we have seen before and it’s really cool and smart.

We do get a nice fight for sure. But it does go a bit deeper than that. Maguire handles the art duties well too. Seeing his art in this issue, you forget Maguire can do fantastic action scenes. Don’t you worry, he reminds you of that here.

We also get a deeper glimpse of what happened to Jon and Lois Lane. It’s quite exciting and it leads to even more questions that really get you going. The little two page snippets of the past are little Chinese boxes that keep opening up.

The ending is something fantastic and has quite a build. It’s leading to an even bigger conflict it seems.

This is an amazing issue and I’m excited to see how Bendis wraps up these two issues.

And then? After that? The regular series starts! And man, I can’t wait for that.