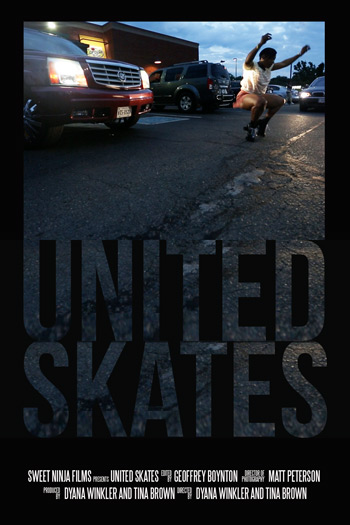 It all started with a trip to NYC’s Central Park to watch the frequent roller-skaters dance to the rhythm of their own music.

What started out as a planned trip resulted in a journey that neither directors Dyana Winkler nor Tina Brown saw coming.

During a routine day in Central Park, the duo was pulled aside and told the tale of an underground African-American skating community who have found refuge from a world of discrimination, poverty, and basic everyday aggravations of life by skating.

To this community, the skating scene wasn’t just about dancing their problems away, it was connected to the early days of hip-hop where artist would test out their new material on the crowd. N.W.A. held their first performance in a skate rink. Salt ‘N’ Pepa tested out their beats while Coolio even graced the skating stage.

This wasn’t  great-grandma’s pastime of traveling a continuous circle but for African-Americans, it was where your soul actually danced to the music. Tricks, splits, well-choreographed moves were showcased. Skates were bedazzled, sneakers and Timbs were transformed into show pieces.

While the documentary is filled with star-studded interviews from 90’s artists, United Skates is about several families across the United Skates who made skating their passion. They wake up to skate everyday, it rejuvenates their soul, and for some it helps keeps their behavioral problems at bay. There’s Phelicia Wright from Los Angeles whose entire family of five has bonded through skating. It helps them stay focused, keep the children from falling into gangs and makes the days more tolerable. These people aren’t rich, no one is looking to become YouTube stars they do it for themselves because without skating, for them, their lives would be unlivable.

While strapping on a pair of skates mean nothing to some, it helped saved the lives of rival gang members. During the 90’s in South Central Los Angeles Blood and Crips often stayed away from each other’s territory. Despite their differences both communities shared a love of skating. But when Skateland was forced to close, the Crips was left without a rink. It was then that an agreement was made between the two gang leaders that proclaimed World on Wheels would be safe for all to skate.

Even though United Skates features the joys of skating, it also dives into its rich history of the planned destruction of rinks. Re-zoning laws purposely caused rinks to close throughout many areas and even though there were multiple protests, signatures and meetings, the city decided to sell off the land for higher profits. It was during this time, Phelicia packed up her family to the nearest skate rink hours away from their neighborhood only to be kicked out because of racism and rules cleverly designed to keep African American’s out of rinks in Glendale.

Unfortunately, this isn’t new as skating rinks has a rich history with the civil right movement. During the 60’s many people came together to rally for equality via sit-ins in front of unwelcoming skating establishments. As rinks were forced to integrate, in fear of African-Americans flooding rinks in white communities, they held special themed nights designed as secret codes for racial discrimination.

As explained by another passionate skater Reggie Brown, “Family Night,” was for the white community while “Gospel Night, “Soul Night” and “Adult Night” were meant for people of color.

Instead of being outraged by the given limited nights to skate, communities took hold of “Adult Night” and added their own music and dance styles. As told by Buddy Love, owner of a Chicago rink, certain dance moves correlated to musical artists of their city such as Chicago dances matching the beats of James Brown’s classics.

United Skates is documentary that educates but also affects the soul. Told through fast paced cinematography, the audience is transplanted alongside the skaters as they showcase breathtaking moves and travel at incredible speeds. Spanning the entire country, it features diverse talents and personal stories that helps the audience fully comprehend what it feels like to have an art form forced into extinction to make way for condos for the rich.

Heartbreaking, hopeful and insightful, United Stakes is why documentaries were created.