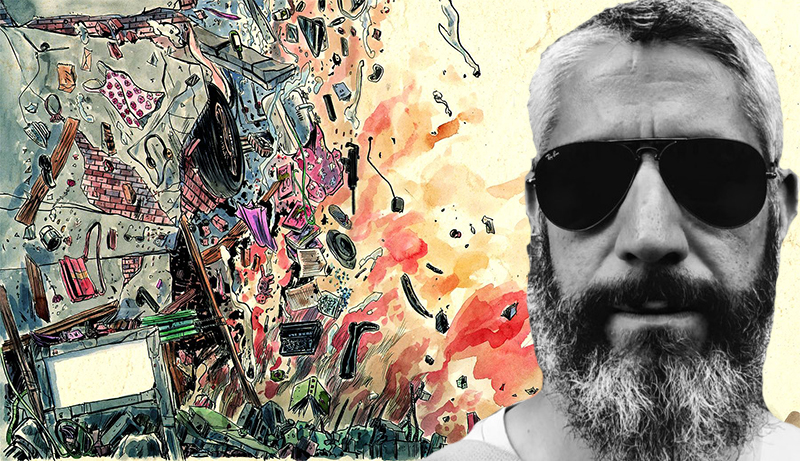 Multiple Eisner and Harvey Award-nominated comic book creator Matt Kindt, has established himself as one of the most interesting creators in comics. The New York Times bestselling writer and artist has worked such established properties such as Justice League of America (DC), Spider-Man (Marvel), Unity, Ninjak, Rai, and Divinity (Valiant).

In MIND MGMT, a former secret agent, the mysterious Henry Lyme, has gone rogue and is working to dismantle the organization he once worked for. There’s a mysterious airline flight and a secret government agency of super spies. This story spans from the 1920’s to the present day—and things get weird. With the story of MIND MGMT recently completed (and in print in six hardcover volumes), it was hard not to get excited about his latest venture, an original MIND MGMT read-along comic book and 7″ vinyl record currently raising funds on Kickstarter.

Collaborating with Kindt is voice-artist Clint McElroy, a comic book artist in his own right and avowed MIND MGMT fan.

Matt took some time from his busy schedule to discuss the Kickstarter, working with Clint, and his upcoming projects.

FOG!: For those of us who grew up in the Seventies, Book and Records were an entertainment staple for kids. What was the genesis of creating a new story in this format?

Matt Kindt: Vinyl has made a resurgence of late and I was digging through my old records and I found those old Peter Pan Book and Records and remembered just LOVING them. It wasn’t just the voice-acting but the music and sound effects. I would just listen to those over and over again. It was one of those experiences that elevated comics but also didn’t change the comic. It didn’t become animation or a movie or something. It was still the comic but with something special added to it. You could still enjoy the art…and after the audio was done, you could still go through it at your own pace and read it. There really is nothing like that experience with storytelling – a crazy mash-up of visual, audio, and text.

I had always wanted to do a modern take on this idea but it just seemed like an unattainable goal. Who would voice act it? I can do every part of making a comic but I am NOT an actor. And my voice is…the worst. So I sort of just dropped the idea. Then I was introduced to Clint McElroy who happened to be a huge fan of MIND MGMT!

I ran this idea by him – he immediately knew what I was talking about and was on board…there was no cajoling or convincing needed. He absolutely GOT it. So I wrote a script for him – he voice-acted everything – all of the characters and I wrote it specifically for him, with the luxury of knowing he was fully into it. 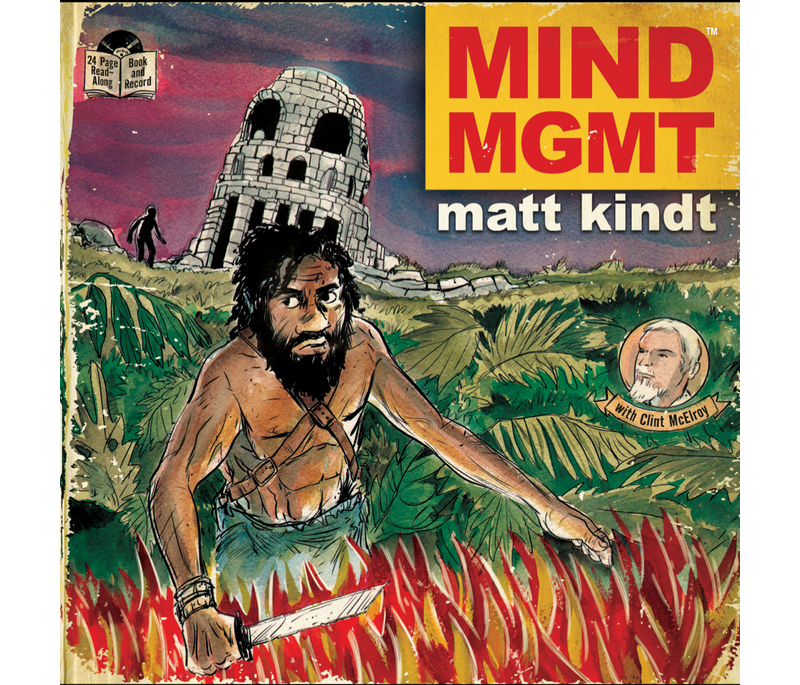 After that, it was just a matter of doing the comic that went along with it. I had this slow realization as I was working on the art…it couldn’t be just like the records and comics I had as a kid. The audio was just a replica of the words in the comic. That’s fine for kids…but this needed to be something more. Not just a gimmick. There had to be a reason the story was in this format. This is really what inspired the actual story and I can’t go too much into the plot except to say that the audio and visual narrative is essential.

The audio on it’s own won’t work. The comic by itself, also doesn’t quite work. They have to be taken in together simultaneously for the entire story to come into focus. It’s something that really hasn’t been done before. And it’s something that I think will take at least 3 or 4 listens and read throughs to get the full experience.

The Kickstarter is focused around your series, MIND MGMT. For folks unfamiliar with it, what is MIND MGMT about and do you need to be familiar with the series to enjoy the Book and Record?

This comic and record completely stands on its own. If you’ve never heard of MIND MGMT. this story will bring you up to speed and then blow your MIND. It’s literally a training and recruitment device…and a story. It’s working on a few levels…ha! MIND MGMT is a secret organization that has worked behind the scenes since the 1920s to both influence and change the course of history. Sometimes it’s a force for good and other times…maybe not.

MIND MGMT. spans the globe as well as time so the series really opens itself up to tell stories in any era and focus on individual characters and their relationship with MIND MGMT. It’s got spies with MIND powers, subversive advertisements, lethal written-messages, and psychotropic children’s books.

Collaborating with you on this Clint McElroy. How Clint come to work on this? What does he bring to the project?

He brings years of professional voice-acting – something that is completely outside of my small world of comics. But he also brings a real passion to comics. He’s got his own new book (The Adventure Zone) that he did with his super talented sons…so I really felt like I was lucky to have him. This project would just be sitting in my notebook as a sketched out idea unless he’d come aboard. 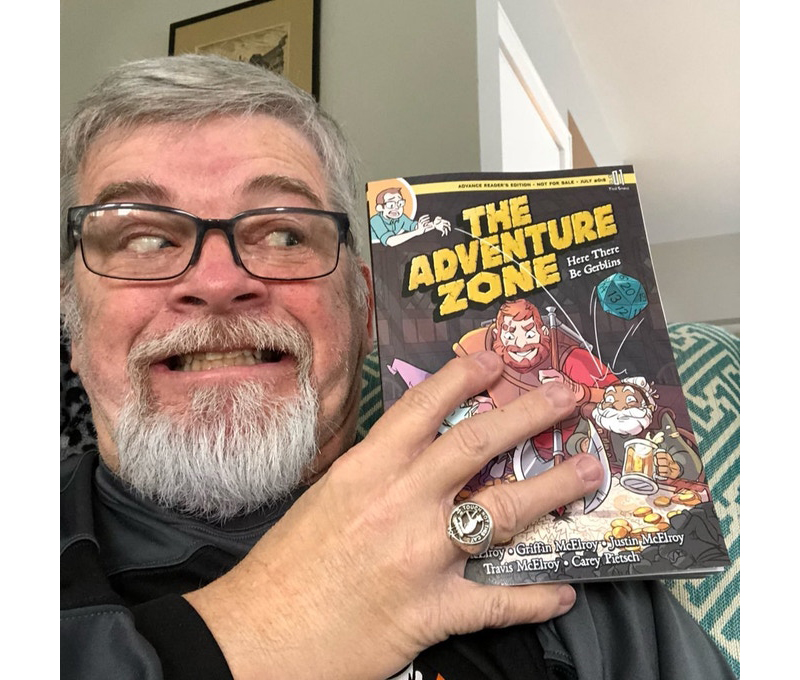 Other than great paper and production quality – and super cool colored vinyl (green or the limited edition gold) – they’re essentially the same. There are some secret hidden messages on the vinyl record that will only work if you play the record manually backwards…something else I’ve always wanted to do so the physical version will have a few little tricks to it.

The MIND MGMT. comic has already ended (and is available in 6 hardcover volumes). Now with the Book and Record, do you have any plans to tell any other stories with the property?

Yeah – for sure. I released a small print-run mini comic earlier in the year and after this I’m going to finish up a MIND MGMT. novel that has been sitting on my laptop waiting for me to complete. I’m really interested in playing with the form of the comics medium but also stretching the concept of MIND MGMT. and applying it’s warped world-view in other ways…making a record and comic like no other…and eventually a prose novel. We’ll see! 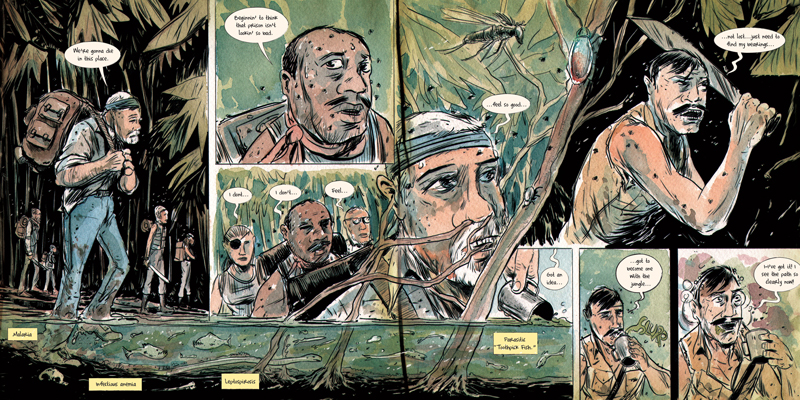 I’m finishing up the second arc of Ether with David Rubin (published by Dark Horse) and I just read the last few pages of the last issue…wow. It’s heartbreaking stuff. David’s is so flexible – going from the absurd and action-packed to the really quiet emotional stuff. He’s already a legend.

I’m also launching a new series with BOOM! Called “Black Badge” which is the follow up series to Grass Kings with Tyler and Hilary Jenkins on art again – the series will follow a scout troop that is tasked with going on high-risk black-ops style missions. They’re scouts…but for real scouts.

I’m telling everyone they’ve got to watch the TV series The Leftovers. I can’t say enough good about that show — ! I’m also just main-lining board games. I new to that medium and I never really considered it before…but board games have evolved in such crazy ways in just the last five or ten years. I had no idea until last year. I own easily over a hundred board games now and I’m excited…they offer a unique kind of tactile quality and there is amazing potential for interactive storytelling. If I had to recommend a board game or three? I’d say Scythe, Akrotiri, and Sagrada are three of my current favorites. 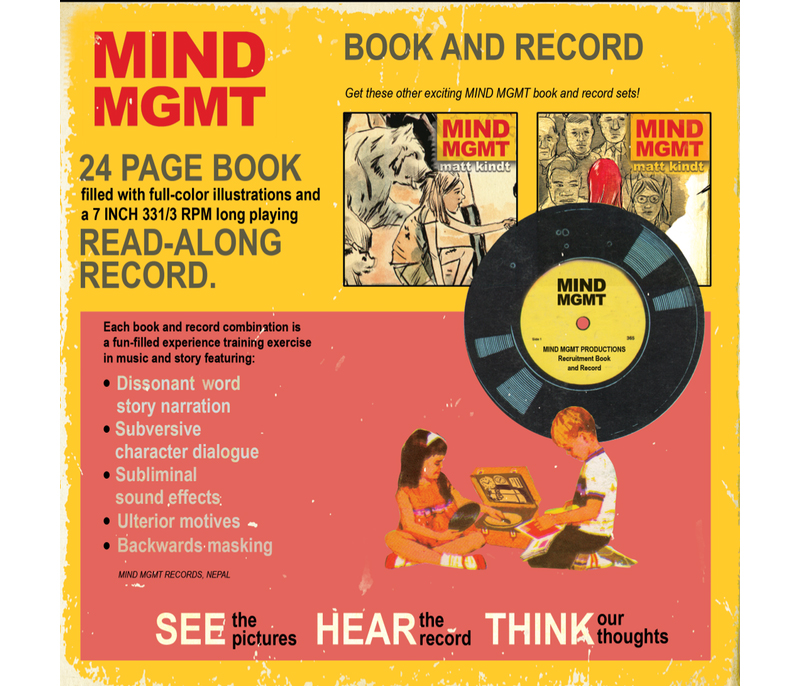