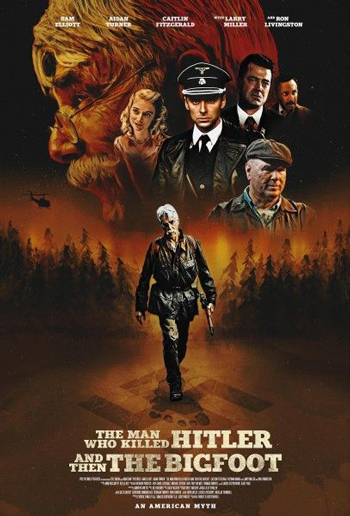 Let’s be honest, how could a movie with the title The Man Who Killed Hitler and then The Bigfoot not pique one’s interest?  Add the always solid Sam Elliott in the lead role and I was ready to sit down and watch what I had already built up in my mind as a cult classic.

As it turns out, The Man Who Killed Hitler and then The Bigfoot (henceforth, TMWKHATTB) was the furthest thing from a camp or cheese.

It’s a drama at it’s core and Elliott’s performance already ranks up there as one of the best of the year.

It’s 1985 and Elliott plays Calvin Barr, a loner, who spends most of his nights drinking alone in thought. One night when leaving the bar he’s attacked by three thugs attempting to carjack him.  Within a minute Barr has violently subdued his assailants and goes on his way.

Barr spends most of his time reflecting on two periods of his life.

Before World War II when he meets and falls in love with a school teacher, Maxine and the period during the war when he takes on a secret mission. With a gift for language, Barr dons a Nazi uniform, infiltrates their headquarters and kills Adolf Hitler.

He and Maxine take different paths and in the years since the war, Barr spends his time reflecting on the road not taken and his alternate life (and potential for happiness).

He’s not particularly close with his several years younger sibling, a barber, Ed.  Ed’s life seems simple; a wife and daughter, a small business; school plays.  But deep down we sense Barr’s jealousy.  Not toward Ed per se, but rather his path.  Barr carries a burden of killing a man and that experience weighs him down.

An FBI agent and a RCMP agent, representing the United States and Canada, arrive asking for Barr’s help with what could become a major health crisis.  A Bigfoot is terrorizing the forests, and is a carrier for most biological plagues.  He’s infecting animals and humans and an outbreak could lead to a pandemic.

Barr takes on that mission and confronts the creature, who, like him doesn’t fit well within modern civilization.  As the title of the movie reveals, Barr is successful; murdering for a second time.

TMWKHATTB is an emotionally engaging genre film that elevates it’s preposterous premise with a wonderful performance by both Sam Elliott and Larry Miller (who portrays his brother, Ed).  It might not be the midnight movie that it’s title hinted at, but TMWKHATTB should be at the top of any genre fan’s “must see” list.