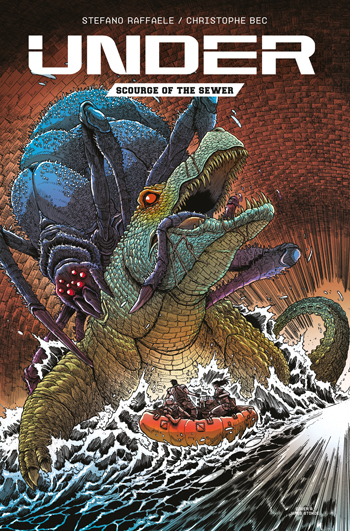 The cover of this book has a big alligator getting attacked by a big mutated spider from hell. It also had human in a raft cringing in terror!

I love any book by the nutty team of Bec and Raffaele. Their books always end up being like a Hollywood summer blockbuster movie gone horribly wrong!

The opening sequence has our hero, Wilson Jericho (what a name!) waking up from a nightmare. He wakes up, looks out the window, and we see he is in a city called Megalopolis.

Right there, I was amused beyond belief. But it gets better.

Jericho is a disgraced cop, of course. So he is forced to be a part of the Sewer Police. Jericho, it seems, is a tough as nails cop who doesn’t mess around. Bec makes his main character pretty stereotypical.

But who the heck cares? I’m hooked by this point like a kid in a candy store.

The book also has a stereotypical scientist in it named Sandra Yeatman. Of course, she thinks something dangerous is going on underneath the city. She and Jericho cross paths. And of course she’s smart but beautiful.

Eventually they come across the monster of the book, which is a 30 foot tall camel spider! He’s a vicious bugger and is quite icky! This is great as we get to see the typical scenes of bodies piled up drained of life.

So it’s up to Jericho and Yeatman to stop him! We get some other crazy stereotypical characters like a corrupt mayor and a hit man. It’s pretty much brainless entertainment but it’s a hell of a ride.

Oh, and we get a big alligator in this crazy mix as well.

The art by Raffaele is great. He gamely illustrates anything Bec throws at him and does it with a straight face. I love this team and can’t get enough of them. And the cover by James Stokoe is killer! I’m happy to have this book in my collection.