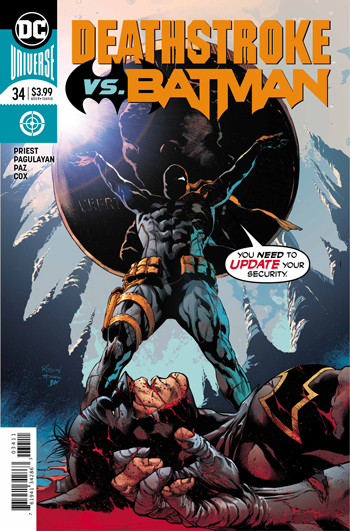 It’s the penultimate chapter of the mini Batman versus Deathstroke epic!

In this issue, Batman and Deathstroke are locked in the Batcave. It’s time to go toe to toe with each other.

Yet, this idea as written by Priest is anything but a standard fight. In fact, it may be the complete opposite.

The opening scene is actually very emotional. We see Slade failing his son, Jericho. His son gets his throat slit as a result of who Slade is. It’s sad and a rare scene from Priest who raises the stakes for Slade for this story.

After that we see Bruce and Damian arguing a bit.

Bruce tells Damian that he is Damian’s father. Things are understandably tense between them. That’s when Slade shows up and holds Bruce hostage. It isn’t long though until the pair dress up and start to fight each other.

Then it’s Batman versus Deathstroke right in the Batcave.

And this time, it’s a death match.

The funniest part of this issue is when Slade calls the authorities on Bruce. Bruce has his assets frozen as a result. I was in stitches reading this part for some reason. It was very well done.

The two best the hell out of each other and it’s magnificently drawn by Pagulayan. Together with Priest, he makes an amazing issue that is easy to read, yet completely unique.

There’s one more issue of this madness. I can’t wait to see how it wraps up. It’s very fun and well done.