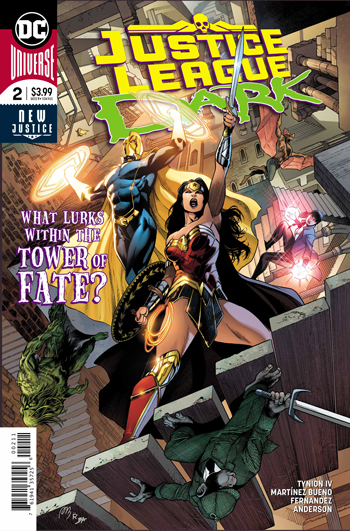 “Hey you’re new to this world, Kirk, but let me break it to you… Magic is big on Newton’s third law. It has a cost. All this wonder? It means that somewhere out there, there’s something dark and terrifying. And it’s always closer than you want it to be.”

The second issue of Justice League Dark hits the shelves this week, and it’s another excellent creative effort by the superstar team Of James Tynion IV and Alvaro Martinez Bueno.

Strike that, this one’s even better than the first. And I’d say that bodes very, very well.

Any good stage magician knows you have to create a good story for a trick to work, there has to be something unique that keeps the attention of the audience and make the execution of the trick itself special.

Part of that is patter. Laying down the elements, so the audience knows what is essential.

Part of that is keeping several balls in the air at once. You’ve got to have plenty to charm and delight if the misdirection is going to work.

Part of that is mystery.

Part of that is tension.

And a big part of all of that is pacing.

Tynion is doing all of these exceptionally well. He’s working with a lot of elements in just these two issues. There’s the world-ending overarching problem with all of magic and magic-dom, there’s the mystery of the Tree of Wonder and Diana’s unwelcome role as the new champion of all that is magical and wondrous, there’s the unlikely forging of a disparate team of oddballs – each of whom it seems have their own mysteries in play, all of which are full of storytelling potential. To say nothing of the role the team itself seems destined to play with all of these, and with the fate of the world entire. Just as it should be.

With all that going on, I’m glad Tynion is not waiting around to get us caught up with the main show. This issue gets right to it, and it’s so satisfying I’m not even particularly put out by the jumble of contradictory frameworks for our understanding the magical world. Light, dark, order, chaos. (Let’s not forget creation and un-creation somewhere now, too. Check out The Unexpected to get what I mean.) Maybe that hasn’t all come together in a neat little bow quite yet, but whatever. This is magic after all. And Tynion does enough in this issue, to show you he’s aware of every angle, and to suggest he has a lot of material left yet to play out.

The art on this book is simply excellent. Martinez Bueno is simply doing wonderful work. Not only are his lines clear and confident, he has a truly excellent feel for both perspective and for capturing movement in still frame. He also utilizes the medium of sequential comic frame storytelling like an absolute master, with layouts that toggle between simple and straightforward to the exceptionally creative. In every case they are always clear, and often they’re just beautiful. It is a perfect match for a script that goes up and down and all around, and upside down besides. As we’re about to see a bit more of.

All of that is great on its own, but I have to admit that my favorite part of this issue was easily the introduction, in a central role, of Doctor Fate.

I’ve been a fan of the good Doctor since I picked up an old Justice League/Justice Society crossover comic from way back in the mid-‘70s. The whole Society was a thrill (New superheroes! Old superheroes? Cool!), but Doctor Fate was of particular interest to me. The cape, the levitation, the magic, all the spectral ankhs and the Egyptology at play, the helmet. Obviously, the helmet. What hermetic secrets lurked within, one could only ask. Even the blue and gold (I mean really? A yellow cape?) somehow it all worked in a way that felt entirely appropriate to the Golden Age of comics.

But then, because he was a Golden Age hero, and a member of the old guard, Dr. Fate was rarely a featured character, and that made him even more intriguing. Possibly the most powerful sorcerer on our plane of the DC Universe, the avatar of a full-fledged Lord of Order, yet like the Phantom Stranger or Swamp Thing, we only ever saw him periodically. It was always a treat when we did. And, we were always left appreciating that however peripheral he might tend to be in our stories of the DCU pantheons, he was always at the same time central to the DCU itself.

So, imagine my gratification, when in only this second issue, after a quick succession of action, snappy dialogue, and plot development, we are treated straightaway to a visit to the Tower of Fate, and all the mysteries that lie within.

Doctor Fate’s story in the DCU may be sporadic but that doesn’t mean it’s been entirely neglected either. The latest run of a Doctor Fate book just ended last year. By the end we saw the return of Kent Nelson to the Helm of Nabu, but also the introduction of a new initiate to the mantle, the young Khalid Nassour.

Nice then, to see Tynion accounting for the presence of both characters in his scripting – though I’ll warn you now, it’s not in any way you’d likely expect.

What that particular twist of Fate is, I’ll just keep to myself. But it’s good, and it promises to be a life-changing addition to the ongoing story of these two heroes.

One I have to admit I didn’t see coming. Because I was so wrapped up in everything else.

Bravo folks. Keep it coming. This is gonna be fun.

Next Issue: Why, what lovely teeth you have Grandma…