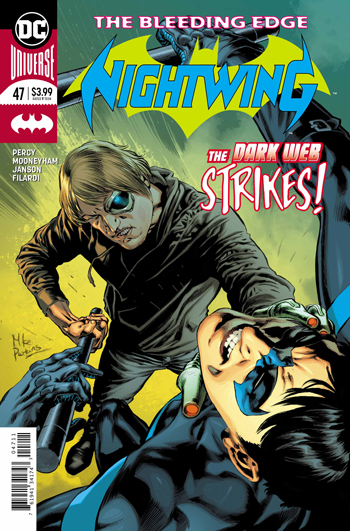 I love the direction Benjamin Percy has taken with this title. Before he came on, I found the writing muddled and searching for a story. He has made the writing clear, the story interesting, and the dialogue real. He’s not reinventing the wheel by any means, but it’s nice to read something that’s just entertaining.

In the opening scene, Nightwing fights against a bunch of web based villains who are under the control of Willem Cloke.

The fight scene as drawn by Chris Mooneyham with inks by the legendary Klaus Janson is awesome. It moves fast and is paced beautifully with amazing camera angles. Mooneyham has really made the book his own in just three issues and I’m loving his work on this.

We are then shown briefly how deadly Cloke is.

Cloke is a great villain because he believes what he is doing is right. That made it terrifying to me.

Batgirl and Nightwing fight and make their way to Cloke. They have a confrontation. But it’s there that they learn that Cloke may in fact be just a puppet. There may be a greater villain out there.

It’s a nice story twist that Percy does a great job in using. The last page is nice and makes the reader ask, “just what the hell is going on here?”

Whoever put this creative team together deserves a raise. They are working at a high level and this book is only getting better. I look forward to seeing what happens next. It’s a great feeling.