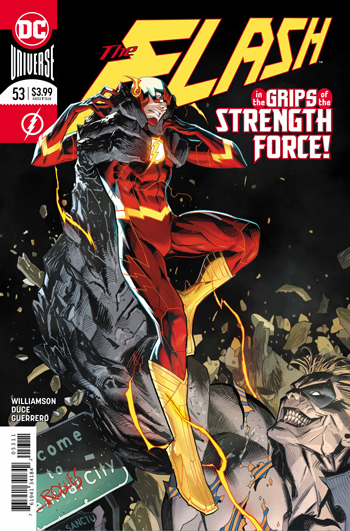 The Flash has been really cool since Joshua Williamson took over writing the series. From the outset, it always seemed like he had a plan.

It’s similar to what Tom King is doing over on Batman just to a lesser degree and effect.

Every issue matters and is a part of a larger tapestry.

And that’s what this issue is: an adrenaline fueled thrill ride.

The opening scene is at S.T.A.R. Labs in the 25th century. There is an attack there by someone who looks like a demented version of the Elongated Man. He has wrecked havoc and it’s a brutal scene that is well illustrated by Duce.

Then, we cut to the present.

The Flash is checking in on Captain Cold who seems to be hurt. Then, we see an attack on the city by a drug fueled version of the Trickster. Somebody is amplifying the Flash’s Rogues powers and it’s up to Barry to piece together who that is.

Eventually, the Flash joins up with Captain Cold to try to take on this version of the Trickster.

There is a surprise twist at the end that is really cool. In fact, it turns Captain Cold into the protagonist in the piece and I think that’s great. Williamson really makes that twist work great. He takes his time and earns it.

The art by Duce isn’t my favorite but I like it enough. I loved when Howard Porter was on this title. This feels like the younger brother of his style. It’s decent but it makes me want Porter back as it’s a little too similar. Still, this is decent stuff and a fine issue overall.