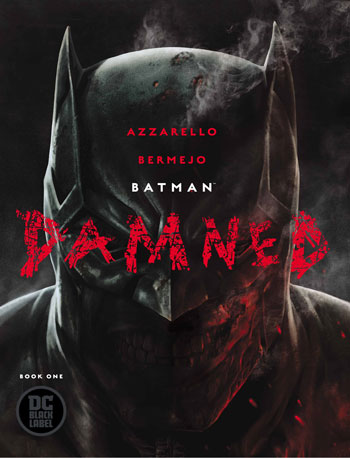 Earlier this year, DC Comics announced their Black Label imprint, designed to give premier creators the opportunity to produce mature stories set outside the DC continuity. Several of our favorite heroes will have a limited series of books. To kick off such a “black” initiative, the only way to go is to with the Caped Crusader. Also, the creators are not that bad either.

The Joker is dead.

No one knows how it happened and Batman doesn’t remember a thing.

Enter John Constantine, who helps Batman trudge through the hellscape of Gotham City to uncover the truth. The horror that confronts Batman while he searches for clues could be his undoing.

Several hints as to who did the deed are laid out in intriguing ways. Some are obvious while others require a little bit of reading between the lines.

Gotham’s moral compass is spinning in every direction due to the mixed reaction to The Joker’s demise. It subtly asks the question if we should investigate or celebrate. After all, the clown murdered a lot of people during his run.

The narrative has its strengths and weaknesses. Several good ideas are presented, The execution, however, falters in one aspect. The heavy reliance on Constantine’s narration sets a good tone but often interrupts this cruel world from telling its story.

Bermejo’s illustrations bring exquisite beauty to Batman’s pain. We’ve seen the Dark Knight grapple with his sanity before. The detail exhibited in the character work, facial reactions, body language, and location settings often says more than any word balloon. The is one page where Bruce Wayne hits the floor of the Batcave that stunningly conveyed the sheer terror of the moment.

The coloring strengthens the already stellar imagery to the point of almost total encapsulation. The light blue motif that fills Wayne Manor leaves little hope to the imagination while stark grays and reds help to augment doom and gloom of it all.

In some ways, we’ve seen this story before.

Whether we’re talking about the Court of Owls, Death of the Family, Arkham Asylum, The Killing Joke or other accounts. Bits and pieces from each have forced Batman to confront death, insanity and unspeakable horror.

This first issue of Batman: Damned, from a narrative perspective, over promises and under delivers in regards to DC’s Black Label format. The artwork, on the other hand, is a gripping visual experience that is worth the price of admission and might have worked better as a silent film on the printed page.