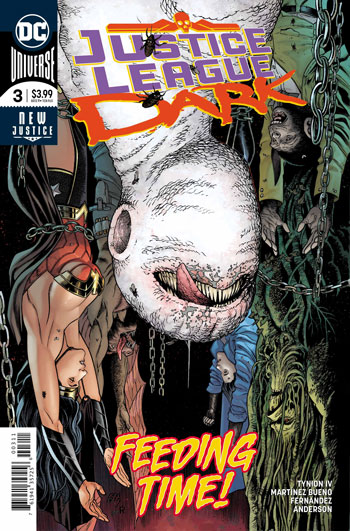 “We are horror itself. You forgot to fear the darkness. We are here to remind you.”

I gotta say, as crescendo’s go, this issue’s a pretty damn excellent one.

Not that I expect it to be the last crescendo, not at all. But it’s a fine marker in the action of our story so far. And this is only the third issue in.

All of which is to say that writer James Tynion IV is not wasting any time to get us up to speed, and then taking everything to the next level.

And if you weren’t concerned about the implications of that last issue, you will be after this one.

Bad enough to have an actual Lord of Order go dark, turned to such a shocking degree that Nabu himself has opened the door for an onslaught of Chaos unlike anything we’ve seen before in our world.

But the scope of that power… It makes all the magical abilities of each of our heroes look like fireflies before the sun.

No question about it, that all makes for a fine bout of storytelling, and once again Tynion and penciller extraordinaire Alvaro Martinez Bueno show us they have what it takes to launch us on a wild ride of magic, action, heroism and horror.

There are more shocks, twists and surprises in this issue than you can shake a magical sword at, and when the smoke of all that hocus pocus clears, we’re left with the certain dread that things are just about as dire as they’ve ever been. Maybe more so.

Mind you, the desire to link all magic, however fine and good, with an equal measure of shadow, horror and hardship, is a bit thin for my taste. That device has become a popular refrain in comic storytelling lately, and it works well enough in comics I suppose. There’s certainly a basis to accept it here in the DCU cosmology, even if it ends up leaving a few holes in the framework big enough to fly a carnival hot air balloon through.

But heck, why bother? This book is shaping up to be a grand play of action and wonder that is epic in every best sense of the word. I’m thrilled to have such a rousing story to run the breadth of the DC magical Universe, and happy to go along with that, especially if our creative team keeps up this caliber of work. And they seem prepared to do just that.

The balance is due on thousands of years of magical Mystery and Wonder in the DCU? Bring it on.

Wonder has its own champion.