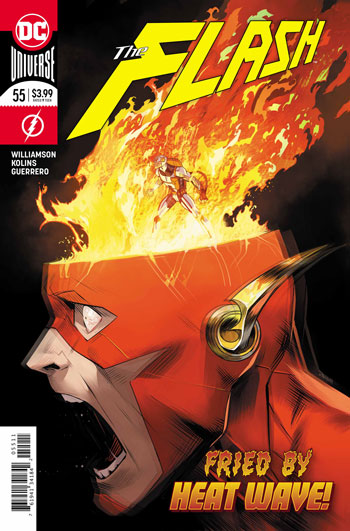 This issue starts a new storyline with the Flash. It’s a pretty smooth start thanks to some decent writing by Williamson. The issue is a little weird and strange, but I liked it because of that reason.

The opening scene has the Flash fighting Solomon Grundy. It’s a solid scene. The artwork by Kolins always fits this title perfectly. The fight happens and the Flash wins and then we move on.

Nothing more, nothing less.

Then, Barry goes to blow off some steam. He goes to a bar. In a really cool twist, the bartender is Commander Cold.

A semi-awkward conversation follows. Then Barry goes and meets some of his friends for a gathering.

While Barry is having a night on the town, there is an explosion at the Iron Heights Penitentiary.

When the wreckage clears, we see that one of the Flash’s rogues has been killed. And then when we cut back to Barry’s night out we see him having visions.

The visions are of someone dressed in a Flash costume screaming that Barry left him. Barry had no idea just what is going on.

Barry and his CSI team at then sent to Iron Heights to investigate. He then finds that there are more visions to deal with there! It ends on a crazy note that leads into the next issue! We also get a glimpse of the villain responsible for this madness!

It’s a great story and Williamson and Kolins are a fine team. The writing and art work well together. This is an intriguing start to the new storyline. I’m enjoying it thoroughly.