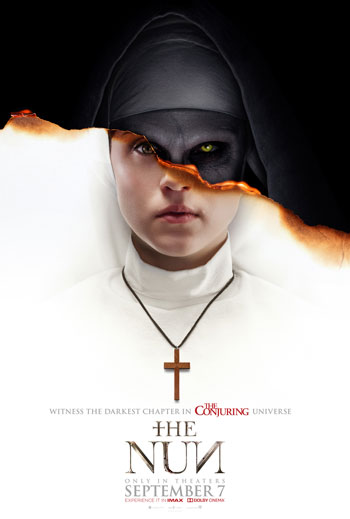 Probably the most successful cinematic universe this side of Marvel Studios, the Conjuring franchise has managed to sustain itself across six films, no small feat for a series without much in the way of easily connectable properties. At that same time, it’s that lack of unifying figure or franchise (aka no Nick Fury) that makes the films stand stronger as self contained works.

Granted, the over emphasis on tying everything to the real life Ed and Lorraine Warren and their real life escapades is a bit nebulous when you consider the majority of their cases have been debunked as straight hoaxes.

However, that doesn’t mean the films can’t be enjoyable as slices of disposable horror, as is the case with the latest offering, The Nun.

A direct prequel to The Conjuring 2, the film takes place in 1952 Romania. When a nun at a local monastery commits suicide, the Vatican dispatches a priest (Demián Bechir) and a young novitiate (Taissa Farmiga) to investigate the death (for reasons that are never quite explained). Along for a ride is a local lovingly named “Frenchie” (Jonas Bloquet) who has discovered the nun’s body. Together, the trio must discover the dark history of the monastery and put an end to the evil that is growing inside, an evil that manifests in the form of a blasphemous demon nun named Valak (Bonnie Aarons).

What I find so strange about the film is how much I enjoyed it in spite of it doing everything I normally loathe about films of its ilk.

However, these same issues largely seemed to be of little annoyance to me when they’re enshrouded in such a decidedly old school, gothic horror aesthetic. I’m a huge sucker for gothic horror and British director Corin Hardy brings a decidedly Euro-horror sensibility to the proceedings. Echoing the likes of Jess Franco’s Count Dracula and the best of Hammer films, I knew that this was going to be something up my alley from the opening shot of a gloomy castle enshrouded in fog. It’s all very Dracula: Prince of Darkness in places with a hint of The Devil Rides Out thrown in for good measure.

Oh, and there’s a cool nod to Fulci’s City of the Living Dead if you’re paying attention.

The other thing the film has going for it is Hardy’s direction. Though he’s clearly working from a similar template as James Wan, he still brings his own style to the table. The 360º pans and canted framing throughout disorient the characters, and by extension, the audience.

As Farmiga’s Sister Irene comes closer to her inevitable confrontation with Valak, it feels like a gradual build rather than an abrupt climax. The film is very much a slow burn, which could be a potential turnoff for viewers coming for a more conventional thrill ride, but I was on board with it. The cinematography also makes the most of its on location setting, embracing the foggy woods and eerie cemeteries in a way that evokes the stuff of childhood nightmares. It’s classic horror iconography, something that I don’t think we get enough of.

Where the film falters is in the third act when it embraces a bizarre tonal shift and goes for comedic MacGuffin chase that doesn’t fit with the previous hour of the film at all. I’m not opposed to jokes to provide levity, but when it undermines the tension the narrative is clearly building towards, it makes things awkward.

One-liners that wouldn’t be out of place in an 80s Schwarzenegger flick don’t really mesh with something that feels like it was taking a note straight out of the Salem’s Lot handbook. It’s like mixing orange juice and toothpaste.

Still, the weak finale is at least bolstered by some great performances by Farmiga and Bloquet, the latter of which is probably the most likable character in the film despite having the least screen time. Bechir doesn’t get much to do, but for a great actor like him, he can still make it work well enough. It’s weird seeing both Farmiga sisters in the same film, as it doesn’t quite seem to decide on whether they are supposed to be related or connected in the film’s universe as well, but it’s a cheeky nod nonetheless.

Come for Taissa Farmiga, stay for the great scenery and atmosphere.