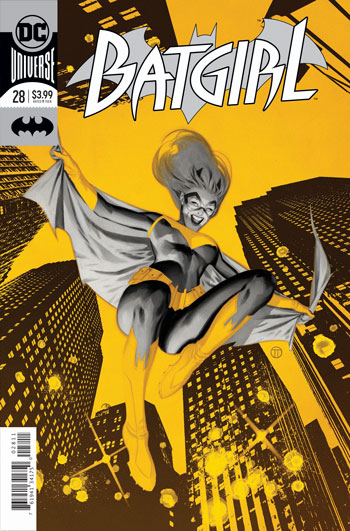 I’ve been trying so hard to get into this book but sometimes you just have to accept that it isn’t going to happen. That is what is going on here.

The new creative team of Mairghread Scott and Paul Pelletier isn’t terribly exciting so we are left with a bland storyline. Too bad as this could be really great.

The third part of their storyline starts off with Batgirl being framed for murder!

The cops find her standing over a dead body and they basically scream “get her!”

Batgirl has to now fend for herself and try to prove her innocence!

We then see that Wyrm is behind the whole thing! We then see Wyrm have a conversation with his human counterpart. It’s boring and nothing to write home about.

So Batgirl goes home to lick her wounds and she runs across her father, Commissioner Gordon.

They have a boring conversation as well. They talk about their feelings and I lost interest at this point. That, and it seemed to go on forever.

Finally, at the end we get a little bit of action. It does have a cliffhanger ending but I don’t know. The whole issue feels like a bust and like a waste of time.

Pelletier does his best with the script but there’s not much he can do. Hopefully this picks up. Otherwise, I can foresee this getting canceled.