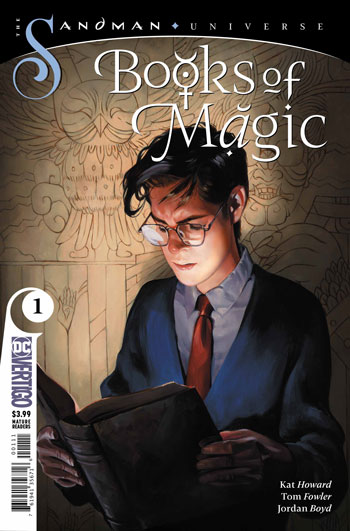 Another week, another debut issue for the new SANDMAN UNIVERSE line of Vertigo books. This time up, we’ve got the revamped Books of Magic, from the creative team of Kat Howard, Tom Fowler, and Jordan Boyd.

Books of Magic tells the story of young Tim Hunter, a bespectacled British adolescent boy who is destined to be the greatest wizard of all time. The superficial resemblance to the Harry Potter series of books has been remarked on often in the past (it’s worth noting that Neil Gaiman’s original comic book miniseries about Tim Hunter was released years before the first Potter novel), but the vibe here is more dark urban fantasy than J.K. Rowling’s beloved heptalogy.

In this new series, which seems to follow on directly from Gaiman’s four issue limited series from the early 90s – creating an alternate timeline that basically ignores the long-running Vertigo ongoing that John Ney Reiber and Peter Gross wrote (like how the new Halloween movie pretends all those crappy sequels to the original were never made!) doesn’t do much in its first issue beyond introduce to Tim Hunter’s current status quo and set some ominous wheels in motion for storylines to come.

Hunter’s not the most likable protagonist, and I’m not sure the book does a great job setting up the stakes involved in his quest to learn the ways of magic. There’s a decent cliffhanger at the end of the issue, but this very much felt like a whole lot of set up and table setting for what’s to come – I get that a first issue of a new comic series has to do all of that, but when it’s done really well the reader should be left with a sense of what the book is going to be like and why that reader should want to buy issue 2 and beyond. As someone with no particular sense of nostalgia for the Tim Hunter character, I wasn’t especially drawn in by this debut issue. Neil Gaiman’s tangential involvement with a series isn’t enough to get me to add something to my pull list

Which is not to say there aren’t things to like!

The art does a great job of telling the story, it’s paced pretty well, and the aforementioned cliffhanger is a pretty good one. A lot of Vertigo books read better in trade collections, and I suspect that’s going to be the case for this one as well.