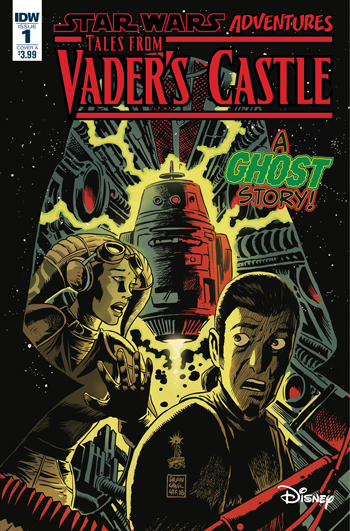 From the moment Darth Vader’s castle appeared in Rogue One, EVERYONE wanted to know EVERYTHING.

Such a place leaves a lot to the imagination.

Nothing about Vader’s humble abode had been revealed in the new Disney canon, and this all-ages Halloween fashioned tale delivers a big fat goose egg in that regard.

In fact, Darth Vader doesn’t appear in the book.

Tales From Vader’s Castle is a 5-issue, weekly anthology series centered and framed around the Dark Lord’s sinister fortress on Mustafar.

Unfortunately, the title lives up to its promise.

A Rebel ship is disabled by imperial fighters, crash landing in a river of lava, directly in front of Vader’s castle.

It’s literally a story told by strangers on the property line of the castle.

The story is serviceable, and the artwork does a good job of capturing the theme of the season.

Still, cannon junkies won’t be clamoring to figure out where precisely in the timeline these events occur. It’s also abundantly clear this comic book is meant for the younglings as opposed to a thirty-eight-year-old with a lightsaber mounted on their wall.

Sith artifacts, secrets of the Dark Side and the number of bathrooms in the castle are not revealed in this opening chapter.

I can’t get out of sorts about it because it’s not meant for me. Children who enjoyed the animated series will probably get a kick out of this book.