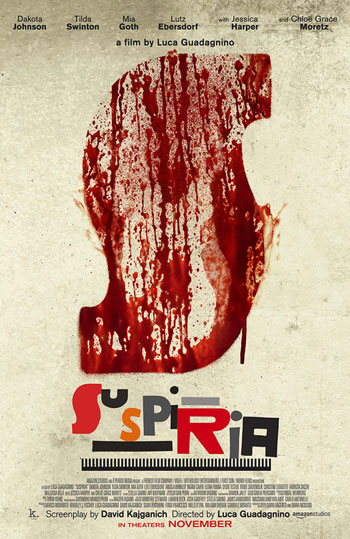 Just when I think I’ve seen the strangest film 2018 has to offer – Hereditary, Mandy, or Border – along comes Luca Guadagnino’s Suspiria.

They are both about a newcomer at a sinister dance academy in Germany and both are set in 1977, but the films couldn’t be more different.

Guadagnino’s film is an elaborate, even operatic slice of weirdness with a lot more on its mind than one strange coven. If that tries the patience of some horror fans, I understand. But to quote Mr. Burns when he viewed Marge Simpson’s shocking nude portrait of him: “I know what I hate, and I don’t hate this.”

It’s been a long time since I’ve seen the Argento original, but I vividly recall the deep, saturated colors and copious amounts of blood. Guadagnino goes in the opposite direction with a desaturated palette suitable to Cold War Berlin. (The wall, as you recall, came didn’t come down until 1989.)

There is still plenty of shocking, bloody violence – some seemingly ripped straight out of an episode of “American Horror Story” — but the film takes its time getting there. It’s a hefty 2 hours and 32 minutes, as you’ve surely heard.

What I don’t recall from the Argento version, which is set in Munich, not Berlin, is the constant background of news reports of the Baader-Meinhof terrorist group. (Helpful note: The “RAF” that is frequently referred to is not the British Royal Air Force, but the Red Army Faction, another name for Baader-Meinhof.)

Grounding the film in memories of the Holocaust and the political clashes of the ’70s make the film more distinctly German than its predecessor, which could have been set almost anywhere. Meditations on what that has to do with an ancient coven and the nature of evil will surely fuel film writers for years to come.

Also padding out the length is the backstory of all-American Susie (Dakota Johnson), who hails from an Amish Ohio home that she can’t wait to leave. She’s always dreamed of dancing with Madame Blanc (Tilda Swinton). She has the stunning luck to arrive at the Markos Dance Academy and not only land an audition, but the lead in their upcoming production.

Swinton is made for horror and there’s a compelling dreaminess to Johnson’s Susie. And fans of ’70s cinema will recognize some of the older actresses among the faculty.

The fact that the dance school (which teaches modern dance, not ballet as in Argento’s film) is home to a coven of witches isn’t a secret, except, apparently, to the students. When they’re alone, the faculty discuss whether Susie is ready for “the ritual” and who should lead them: The unseen Markos or the celebrated Blanc?

The film builds to a finale that rivals the over-the-top craziness of Hereditary and Mandy. Seriously, can we have a conversation about which one is the most insane?

While I can’t say I walked out of Suspiria with the same giddy, “what the hell was that?” feeling as those two films, I certainly wasn’t bored.