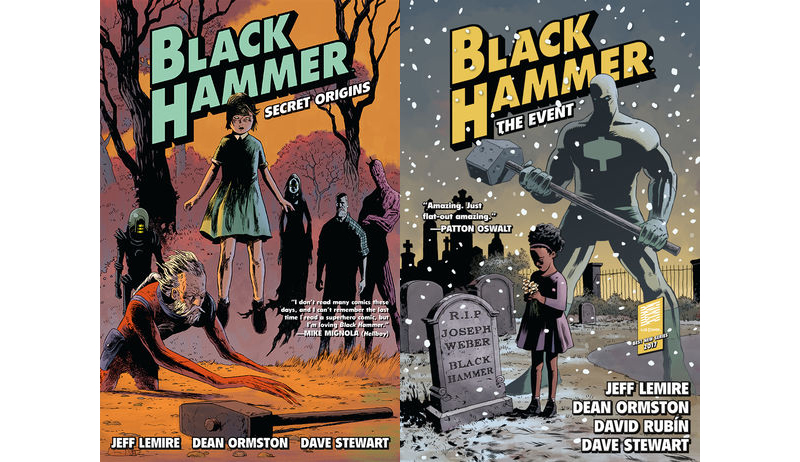 If the answer to any three or more of these was yes, then hopefully you’ve already been reading Dark Horse’s various Black Hammer series, spin-offs, and specials these past few years as it is almost literally all those things—and more—stirred up in a comic book blender and then plopped back out as something all new.

Me, I’ve just read the first two collections from the main, Eisner-winning, series. At first, I was thinking I had seen all this before. Little by little I came to realize that this was exactly the point of Black Hammer.

First the bad part—I’m not thrilled about the covers of either of these volumes. The first one evokes Afterlife with Archie, oddly NOT one of the comics series in the Black Hammer mix. The second cover is notably better but gives only the slightest hint of what can be found under the cover. Seeing these two covers in a shop, I would most likely keep my eyes skimming past them without a second thought.

Inside, however, the reader is quickly drawn on by Jeff Lemire’s excellent writing and characterizations. We meet a very odd family residing in a little town in the middle of nowhere. and quickly learn that no one is what he or she seems. In fact, this is the tenth anniversary of their arrival when they, as superheroes, seemingly blinked out of existence while defeating a Bronze-Age style cosmic villain.

One of the heroes has died. This was the Black Hammer. Back on Earth, his now-grown daughter, a journalist, is trying desperately for a way to find her father or at least find out what happened to him. Before the end of volume two, she finds out.

As an ongoing series, there is, of course, no final ending to be found here, but with so many satisfying moments along the way, you almost lose track of that. With plenty of flashbacks, we learn the backstory of all the characters as well as a few genuine twists of the more traditional superhero tropes.

Small town secrets abound and more cosmic secrets are never far away, either. Black Hammer really is a mish-mash of things you know you know and yet things that keep you off-balance every step of the way.

The appropriate, and very good, art, mostly from Dean Ormston, reminds me of that of Rick Veitch. There’s lots of extra art from many folks (even Fred Hembeck!), as well as behind the scenes art and background from Lemire.

The story itself is very suspenseful and not exactly light but if you’re at all familiar with the various points and people it mimics, it can nonetheless be a lot of fun, like a Silver Age/Bronze Age fever dream.