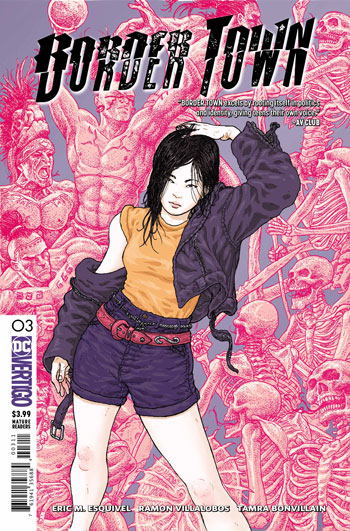 People have always feared what they don’t understand. Logic and tolerance are often absent during these divisive times.

After a brief history lesson dating back five hundred years, Frank, Julietta, Ami, and Quinteh find themselves thrust toward a destiny they don’t want.

Life is hard for them to the point where they feel their hometown of Devil’s Fork, AZ isn’t worth saving.

The police are called in a moment that exemplifies their moods to the Nth degree.

Visual and narrative strokes ingeniously use xenophobia as a weapon of salvation, which serves as a sweet but bitter victory for the soul.

Commentary regarding the homefront is spiteful while a warm moment between Quinteh and his little green monster friend serves as a reminder of the good that is worth saving.

Eric M. Esquivel and Ramon Villalobos don’t waste a single word balloon, panel or illustration. Everything on every page means something. Even if it doesn’t seem that way at first, the poetic punchlines of various situation bring it all together with a potent synergy that creators would kill to exhibit on the printed page.

Ami’s conversation with a teacher regarding an abstract assumption of her ethnicity brought out all the feelings of inadequacy and marginalization, with the volume dial turned way up. Then, the dial completely falls off, making it the supernatural’s turn to take the wheel with the narrative.

Blending the contemporary political climate with demons and hellspawn sounds like something that shouldn’t work.

For three issues now, Eric M. Esquivel has not only made this concept work but thrive at every conceivable turn. Illustrations of mutilation, terror, and warmth conjure a deep appreciation for the overall body of work. And, of course, the book ends with another hook that makes the next issue all the more anticipated.