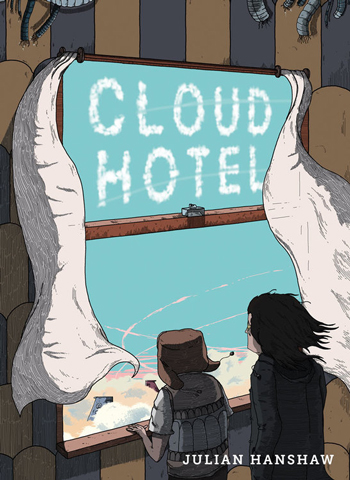 Have you ever been in the middle of a dream when you suddenly realized that it WAS a dream and then everything changed? That pretty much describes my reaction to Cloud Hotel, a “hypnotically peculiar” graphic novel by Julian Hanshaw.

At first I was not impressed. The more I read, the more incoherent the narrative became.

Eventually, though, the revelation hit me that this was, in fact, a dream—a dream in book form. People changed, settings changed. Nothing was real and yet everything was sometimes all TOO real! Nothing made any sense and yet, if you tried, you could usually see where it was all coming from.

Cloud Hotel is, on the surface, the story of a boy who goes missing, but is found.

Below—or is it above?—that is the story of a boy who goes missing and ends up…somewhere else, with the ability to come and go.

But it isn’t really just his story. There are other missing children. And there are his relatives back home. And people he meets many years later. It’s…complicated.

In the end, I was reminded of some of the trippier stories that used to appear in underground comix from the likes of Dave Sheridan or George Metzger, taken to a modern extreme, presumably without the use of artificially expanded consciousness.

The storytelling is leisurely and took a while for me to get a grasp on but in the end, it was working perfectly for me and, more importantly, for the material. The artwork is very modern in that way that looks slightly amateurish but eventually you realize how polished it actually has been all along.

It isn’t really philosophical. It isn’t really an exciting or even a particularly important tale. What Cloud Hotel is turns out to be little more than what it appears to be—that dream. That dream we’ve all had that feels so real and yet so confusing. That dream that fades quickly as you face the new day but which leaves you with feelings you weren’t expecting and don’t quite understand.