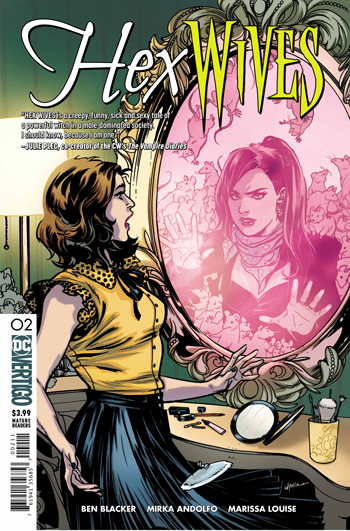 The first issue of this comic had a very intriguing story behind it.

Basically there are a group of wives who have a bunch of witch-like powers that they don’t know how to handle. Their husbands seem to know all about it too but they are not talking.

And so begins one of the weirder books of the past few years. I’m liking it very much at the moment.

The opening of this issue has Izzy jumping into a pool. Her husband surprises her. They have a domestic scene. Then, she gets ready. We see her in the bathroom. She changes her appearances in the mirror by will.

What is going on? What powers does she possess? What is the extent of them? And what does her grinning husband know about it all?

The story of Izzy and her husband Aaron take up the first half of the issue. We see then do everything a couple does, right on down to one of the most awkward sex scenes of all time.

Eventually, Izzy’s friend Nadiya comes to her door. Everything seems so normal. Yet, there is something going on beneath the surface. The domestic society Izzy is a part of isn’t what it seems. And there are bigger forces at work than anyone could think is possible.

Blacker is a fantastic writer. He makes everything feel real. That just adds to the horror of the book. When things finally erupt near the end of the issue, it’s really a shocker. He paces it just right to make for an uneasy but ultimately rewarding experience overall.

The art is great as well. Andolfo does some top notch work here and brings the script home. It’s wonderfully drawn and there is so much quiet emotion that is brought to the page. It’s really great. This book could be a sleeper.