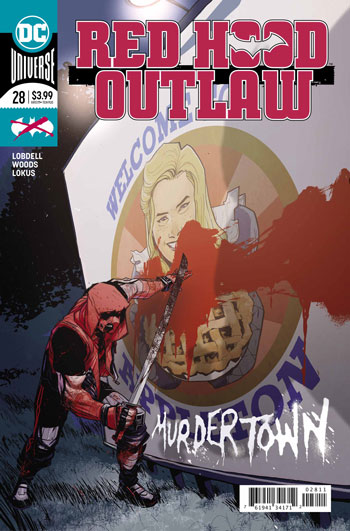 This book has been taking on a decidedly different direction in the past few months. And I have to be honest: I’m freaking loving it.

Having the Red Hood as an outlaw is quite awesome and lends itself to some really cool story possibilities. This issue is one of those stories.

The opening sequence has a sheriff in traction at a hospital. The Red Hood has put him there. We see a shadowy figure talking to him. He wants to know everything that the sheriff told the Red Hood.

Is it Batman? No, but it is the Wingman.

Lobdell starts the issue with a nice scene and gets the plot running from the get go.

From there, we cut over to Jason Todd in the town of Appleton. There is an apple festival going on in this weird town and Jason is walking the streets. It’s hilarious. Jason notes how serious these people are about their apples.

People throw apple pie his way and apple cider. Jason just goes along with it. All of that changes when one of the nice and sweet natives tries to kill him. The old man shoots an automatic gun at him and we are off to the races! What is going on in his town and why are they trying to kill the Red Hood now?

Jason then decides to take on the whole town! Yet, he goes down fighting the good fight. He awakens tied up at night with a big monster watching him. Things look hopeless until Batwoman shows up! They fight to take down this crazy monster and escape the town!

The issue ends on a cliffhanger. Lobdell doesn’t continue the Wingman storyline but I’m assuming he will next issue. The art by Woods is fitting and fun. This is a great book. It’s a nice, off the cuff gem by a strong creative team!