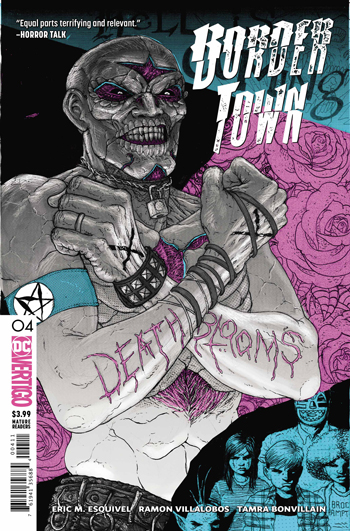 Some would categorize the excellent storytelling of Border Town as a slow burn towards the unknown. A property with the luxury of having no source material can spread its wings as its creators see fit. However, there is nothing slow about the narrative Eric M. Esquivel has set up over the last three issues. Character development, world-building, and captivating illustrations by Ramon Villalobos have set the stage for the next step in this politically charged supernatural tale.

This issue serves as the riotous calm before what will undoubtedly be a chaotic storm.

Julietta is the next character Esquivel takes a deep dive with as her parent’s undocumented status has compounded the racial struggle she endures. Ramon Villalobos’ and Tamra Bonvillain’s depiction of this reveal was as brilliant as it was painful. I wanted to reach into the panel and hug Julietta.

She virtually lives a secret life; refusing achievement to keep her parents safe. It is not easy on her parents either, who have to stand by and watch their daughter deprive herself of the opportunities they came to the U.S. to attain. Meeting Julietta’s mother and father early on gives the reader a firm appreciation of their struggle to raise their daughter, making everything else that occurs a little more heartbreaking.

What are the worst things that can happen to a racist?

Think about it. Well, skinhead Blake, who got beat up by Frank in the first issue, experiences the horror in gruesome fashion. Even worse, he must help illegal immigrants in a backhanded way that could spell doom for everyone in Devil’s Fork. It’s sweet revenge if you like to see these likeminded folks get their just deserts.

However, the poetic execution of this moment is displayed with a derogatory simplicity that perfectly suits Blake.

This series adds another layer to its relevant nature in the form of reverse racism. Arnie Hernandez, a half-Mexican, half-Italian, cowboy hat wearing, immigrant-hunting sheriff who goes to deplorable measures to keep people “safe.” He’s the embodiment of everything Julietta and her family fear while echoing the sentiments shared by many people of color. Hernandez justifies his actions because he believes everyone should enter the country legally as he did. There are shades of gray involved here that others see as black and white. Hernandez staunchly supports the latter, which serves as the linchpin for this new character.

As always, the illustrations exhibited some great visuals complemented by the perfect color palette for every scenario. There was, however, something off about the character work on Quinteh. His body type was a lot leaner and less bulky than the previous issues. This could merely be an oversight or a creative decision to change Quinteh’s appearance.

Four issues in and the story gets better with every outing and my excitement increases with each book that is released. Something big is about to happen at the U.S. / Mexico border. Those on both side of the fence, both living and dead, are in for a rude awakening that will serve as the ultimate test of tolerance for everyone involved.