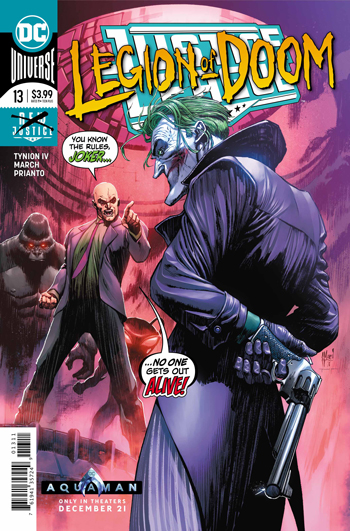 “Why should I trust you?”

“Trusting in others is an idiot’s game, Lex. You don’t need to trust me. Trust yourself. Trust in that chip on your shoulder. Trust that you’ll win, even though you might lose.”

Really, be careful what you wish for.

Even more, be very careful what you unleash.

I gotta say, I’ve wondered from the beginning of this run, just what it is that’s happened with Lex Luthor exactly to get him to this highest high-point of crazy megalomania in his life.

I mean aside from the inevitable 180-degree turn-about from his brief brush with heroism – a turn that never really took hold for all that it was quite evidently self-serving and cynical – and despite the piece of future history we’ve been shown already in these pages, the one that seems to have rekindled Lex’s… let’s call it faith, in the pre-eminent appointment of said self-serving cynicism.

Nonetheless, what makes a brilliant strategist like Lex Luthor ever come to the conclusion that it’s a good idea to create a team with The Joker as a founding member?

The answer to that very question is provided in this issue. Or at least, an answer is provided: according to Lex himself, the Joker’s predatory depravation represents the pinnacle of what Luthor has decided humanity truly is, at the core.

It’s… an interesting answer. I mean, yeah, it’s consistent. We already know that the sequence of events that transported Lex into a world of doorknobs and Doomsday plots, has installed a disturbing conviction in that vast scheming mind that is appropriately dark and Machiavellian.

Sounds like it. Maybe more than dark. Indeed, in this issue, scripted this week with evident and ingenious relish by James Tynion, we get a glimpse into the very real possibility that there may be more than just a tinge of madness in Luthor’s new outlook on life.

After all, dancing with the devil has never particularly been a winning proposition. Trading down doesn’t seem the smartest move from there.

It’s the one thing the Joker has been dead set against since the start of the whole affair – The Batman-who-Laughs. A genuine demon of the pit that even the Clown Prince can see is working angles that Luthor could never anticipate.

How does the Joker know that? Because Lex can’t even anticipate him. Not even in the one thing that makes him more predictable that Luthor is himself.

Nobody puts Joker in a corner.

Now we finally get to see the fall-out of Luthor’s accord with the Batman-Who-Laughs, (just in time for next month’s The Batman-Who-Laughs six issue limited series, of course!), and I have to say I’m really pleased it didn’t take Scott Snyder and James Tynion long to get there.

Indeed, the whole wind-up, pitch, and knock-out at the plate of what happens this week, is a tremendously satisfying piece of storytelling, fully centered on two of the most twisted, dangerous and deranged minds in all of DC villainy.

Backing Tynion up is guest artist Guillem March, who’s work can be a bit rough, but nonetheless has a wonderfully distinctive eye for pulling out the darkest corners of our anti-tagonists. The book consistently has the feel of a faerie tale running darkly, and as it turns out that’s a perfect match for what goes down this issue.

But I won’t get into that. I’m sure you can suss it yourselves if you give it some thought.

But never fear, it’s more than you think. In fact, this story is at once the most predictable and yet also the most deliciously unexpected tale you’ll read this year.

Appropriate for a drama play of two villainous minds that are ordered, each in their own way, by contradiction, paradox, and… let’s call it insanity.

I mean really Lex. Whatever fever has gotten hold of you recently, it’s pulling you all the way down to the very worst bits of yourself, isn’t it?

Careful. You never want to put all your faith just in what you can see in the mirror. All you’ll ever get is an infinite regress.

To say nothing of trying that in the Funhouse.

Wonder if he’ll get the message.