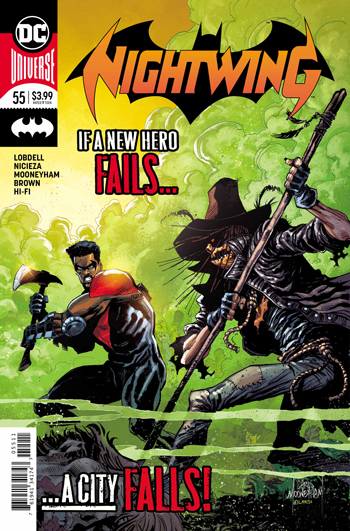 This storyline has been mostly hit or miss for me.

The last issue and this issue were much better than the earlier chapters. Dick Grayson was shot and he is in recovery. He has stepped away from being Nightwing. But that doesn’t mean that Dick has avoided trouble at all. In fact, it seems like it’s quite the opposite!

The opening sequence has a frazzled Dick Grayson in a fight. He wins but he is a bit shocked. He talks about how his muscle memory has kicked in. But it seems like Dick is against being Nightwing. He’s trying not to even think about it.

From there, we see a scene with Detective Sapienza. Sapienza is accused by the press of being the new Nightwing going around. He laughs at this notion but has dedicated himself to find out just who is behind the mask.

And then we see a scene where Detective Elise Svobada visits a Dr. Gruidae and he overpowers her.

It turns out this villainous Doctor is actually The Scarecrow in disguise. And then he just cuts loose! The artists cut loose here as well and the visuals are quite dynamic.

The rest of the issue is basically Dick trying to not fight but ending up in fights anyway. The Scarecrow starts taking over the town! And then the Nightwing Squad all come together at the end. And it’s pretty glorious.

This issue is more action packed and that’s when this comic book works best. The scenes where there is no action happening go by at a crawl. But that’s a minor complaint. This is a pretty decent issue with a knockout ending. It’s a book definitely on the upswing.