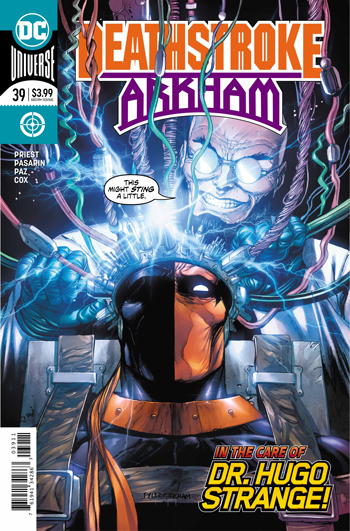 Christopher Priest has done a great job giving this title an identity of its very own. He’s imbued Slade Wilson with an amazing personality and character.

Now with Slade being in Arkham Asylum, Priest gets to show us yet another side of the character. And it’s been truly wonderful.

This issue begins on a bizarre note however.

A bunch of bad guys and aliens are dropped from an airship of some kind. They all seem to be led by Slade Wilson. They seem to be invading earth. Just what the hell is going on?

Some of the heroes take notice. They all wonder what Slade is doing out of Arkham Asylum. He is supposed to be locked up of course.

How did he end up where he is now attacking the earth?

Priest then cuts back to Slade as a prisoner at Arkham Asylum. He is being freed from his captivity by Two-Face and his gang.

They tell him not to worry about things and that he is “with them” now. What plans do they have for him?

Normally I would say escape, but it seems that they have bigger plans than that.

What are those plans? And how is it linked to the beginning? Priest is getting to it slowly. All of the answers are coming for sure. It’s just taking a bit of time to arrive for me.

This is a transitional issue for this storyline.  That’s not to say it’s bad. It just is leading to the finale. You could call it the calm before the storm.  I’m interested enough to see where we end up. It could very well be a new status quo for this title. We shall see.