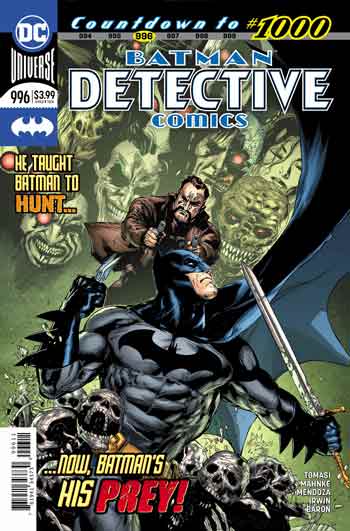 The latest storyline in this title was one that came out of the gate and it caught me completely off guard. I wasn’t sure what to expect but man, it’s awesome. Tomasi and Mahnke are a dream team and they are completely knocking it out of the park. I can’t think of a better way to lead up to Detective #1000!

The issue begins with Batman going through Arkham Asylum looking for clues. Somebody is messing with his life, and he’s not having it!

So he interviews his rogues gallery that are locked up. It’s a fun sequence drawn by Mahnke that starts us off.

And then from there, things really get rolling right along!

Bruce heads back to the Batcave to gather some clues. He talks with Damian and he comes to the conclusion that Henri Ducard has something to do with his current predicament.

So, Batman packs a bag and heads over to Paris, France! It’s time to find Mr. Ducard and claim his life back.

We get to see a page of Bruce conducting investigations across Paris. We even get to see him dressed as Matches Malone!

I love the way Tomasi handles things on the writing side of this issue. It moves fast but never at the expense of good storytelling. Tomasi adds nice little flourishes throughout the issue as well and a few nods to things in the Batman universe.

Eventually, Bruce comes up against Henri Ducard. They have a confrontation but eventually end up talking. There’s even a funny moment when Ducard admits that he’s heard of Damian and that if he met him, he might like him.

Then, the monstrosity that Batman fought in Gotham appears. They fight it. At the end of the battle, Batman finds a chess piece. He realizes at this point that the people who made Batman are being unmade. But for what purpose? And who is behind it all?

This leads Batman to climbing a mountain in North Korea. He has a confrontation with a guardsman and it’s awesome. Then, he meets up with his old master. This leads into a strange but exhilarating ending. I’m not sure where Tomasi is taking us but I’m along for the ride completely!

Detective Comics #996 is an amazing chapter in the storyline leading up to issue # 1000. Tomasi and Mahnke are creating a great and interesting story. I have no idea who’s behind this plot but I can’t wait to see. The only thing that is hard is the wait between issues.