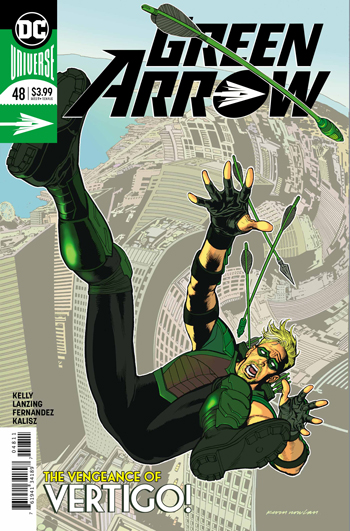 Don’t be surprised by the vertigo you feel when you look at the new creative team for Green Arrow #48. What’s real? Where’s Ollie? Who’s Canary? We kid, and we all know that Green Arrow is firmly planted in the verdant city of Seattle, with his partner-in-scream Black Canary taking this city-saving business really seriously this time!

Lanzing and Kelly take over writing the title from the explosive Benson and Benson team which ended with our heroes jetting skyward in his very own Arrow-Wing!

No complaints from me here, in the Rebirth era of Green Arrow, the pen has been tossed from one team to the next rather quickly, but luckily consistency hasn’t been much of an issue with this book to what I owe to a recognition of the character from TV translating into a broader understanding and recognition of Arrow.

Growing the story from each new team is a very television like approach which works well here, though not every time.

Lanzing and Kelly have popped in on our favorite characters including Green Arrow, Nightwing, Dick’s former book Grayson and Gotham City Garage. These bona fides only conclude one thing, these are more than fill in issues and we get plenty of substance.

Count Vertigo is returned to the fold, escaping from prison by mastering a ‘Doctor Strange’ / Inception building inversion power. Vertigo’s entire story here is masterfully presented like a Bond villain in drips over the course of the issue that climaxes with Arrow and Canary facing down the former drug lord.

The death of Roy Harper and the events of Heroes in Crisis #1 are still rippling through the DCU, and this issue tackles Oliver’s grief issues and his beef with Superman all the way back in issue #45.

While I didn’t think Green Arrow’s Batman impression was particularly funny (I think Bruce would have an issue with it too), the way that Canary and Arrow talk is comfortable and realistic, this issue’s Ollie is also a bit quippy, but I don’t mind. Overall we are treated to great dialogue and storytelling. Javier Fernandez uses more than one double page splash to prove his point that he can really draw, and the Vertigo prison page spread would make J. H. Williams III proud on his composition.

We’re also introduced to Jayce Riot, a member of the 99% who is not yet a member of this version of Team Arrow but I can see them being integrated soon as a Baker Street Boys analog to keep an eye on social media and justice on the streets. Oliver and Jayce aren’t friends…quite yet.

Great to see Count Vertigo being used again as a rogue and some amped up powers as Vertigo searches for revenge, not on Arrow, but on Roy Harper — the man who put him away!

Impossible bricks rebuild around Green Arrow and Canary as they dip into Green Arrow #49, also by Lanzing and Kelly!

Not for nothing, this issue would read as a good jumping on point for those interested in Green Arrow but not knowing where to start.